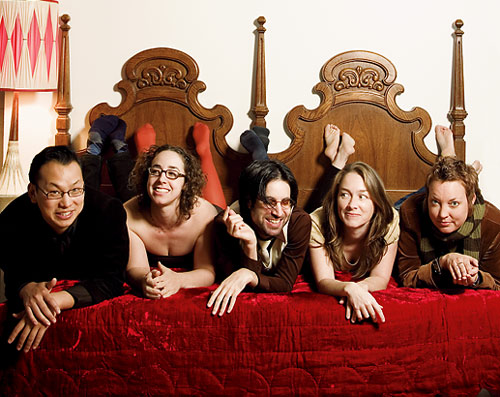 At first blush, All Good Dreamers Pass This Way sounds like a lovely rainy-day album, awash with arpeggiated guitar chords, melancholy strings and boyish vocals. That Bedroom Walls label their style “romanticore” only amplifies the insular impressions. According to a manifesto on the Los Angeles band’s Web site, the aesthetic includes “dancing alone in your bedroom to (Haircut 100’s) ‘Love Plus One’; minimalist posturing undercut by epic gestures; knowing your ex-girlfriend is happier now; sighing too loudly and too often.” But sighs aside, the band serves up misery with a sense of satire.

“If anything defines romanticore, it’s this bittersweetness,” says singer/guitarist Adam Goldman. “But it’s also just having a sense of humor about it; straight-up melancholy is boring. Like the first song, ‘In Anticipation Of Your Suicide.’ It’s actually a mean song about suicide; you don’t find a lot of them. How about writing a song mocking the person before they commit suicide as a way of preventing it, instead of saying it’s so serious and sad and romantic?” (Goldman denies that the song is about Elliott Smith, as some have assumed.)

The romanticore business began in 2001, when Bedroom Walls were a trio that included current Liars drummer Julian Gross. The band at one point expanded to seven players but has now pared back to a core group of five.

“It’s now easy to find bands that are making sad, pretty music,” says Goldman. “But in L.A. five years ago, you didn’t find bands that were doing that. So to set ourselves apart, romanticore started as a joke. It was almost an apology: OK, we’re not rocking, and we make this moody, sad music with a sense of humor.”

All Good Dreamers fits Goldman’s description slightly less well than its predecessor, 2003’s I Saw You Coming Back To Me. Dreamers brightens with the poppy, toe-tapping “Kathy In Her Bedroom” and the big, dramatic chorus of “Do The Buildings And Cops Make You Smile?” It also contains a handful of what Goldman calls “creepy seduction songs” in the tradition of Randy Newman and Pulp. The lyrics of “Hello, Mrs. Jones” portray an overconfident teenager trying to seduce his girlfriend’s mother in a late-night phone call; the weary vocals, mournful violins and reverberating guitars make it sound like the Clientele.

“I’ve been listening to a lot of Jacques Brel but also thinking about Janet Jackson’s ‘When I Think Of You,’” he says. “I want to bring those two things together.”

“It’s still romanticore because I’m still doing the songwriting,” he says. “But I don’t think the world needs any more melancholy, mopey music. At the time, at the start, I didn’t think there was enough of it. But now there’s plenty of it.”