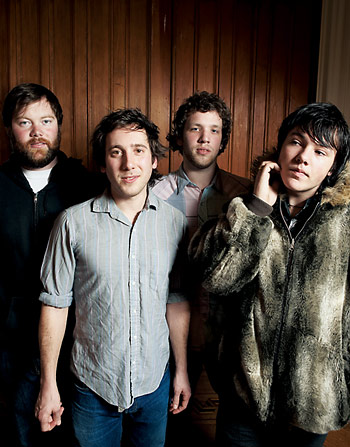 The Subjects are your typical high-school band—with a twist. Before David Sheinkopf and Joseph Smith could focus on making music, the teachers first had to learn something from their students. Two of them in particular.

“In the beginning, Dave and I wrote songs without plans of performing them,” says 27-year-old Subjects guitarist Smith. “When we started playing with Matt (Iwanusa) and Jimmy (Carbonetti), it quickly became apparent we could develop.”

Iwanusa and Carbonetti, now both 21, are the Subjects’ drummer and guitarist, respectively. They were, just as literally, the subjects of Mr. Sheinkopf and Mr. Smith: at the Churchill School in Manhattan.

“We had worked with both of them,” recalls 28-year-old singer/bassist Sheinkopf. “I was their video teacher and Joe was their English teacher. Joe and I had written a couple songs, and a friend asked if she could send them around to try and land some shows in New York. But first we needed a band.”

Thus begat this real-life School Of Rock. The casual practices began as clandestine jam sessions. After class, of course. “Churchill had a great recording setup, so we started rehearsing right there,” says Sheinkopf. “We didn’t tell Matt and Jimmy we had dates lined up. It was obviously a tough position: We knew we had to wait until the year ended. We couldn’t exactly be playing shows with these guys and giving them grades the next day.”

Graduation soon came and simplified matters greatly. After playing three local gigs (“to a grand total of 20 people,” says Sheinkopf), the group yearned for a larger circuit. “We got bundles of experience hailing cabs and transporting instruments,” smirks Smith.

Nearly three years later, none of this sweet Cameron Crowe treatment-in-waiting would be pertinent if the homework hadn’t paid off. Not counting a rough, self-released, self-titled 2006 EP, With The Ease Grace Precision And Cleverness Of Human Beings (Pretty Activity) is the Subjects’ debut, and it’s a remarkably solid one. “Melody” and “Bird Song,” two Iwanusa-penned tracks, are involving, off-kilter Kinks marches, full of quirky melodic turns and floating choral harmonies. The Sheinkopf/Smith partnership, meanwhile, yields everything from leisurely paced psych rock (“Caught Between,” a shrine to Pink Floyd’s Animals) to melodica-voiced polka miniatures (the unsettling “The Best Of Us”) to polished, volcanic multi-part masterpieces (the screaming “Hounds Of War”).

“We recorded in 14 days,” says Smith of Beings’ breakneck creation. “Most of the songs were ready to go when the tapes started rolling.”

“The music is concise,” says Sheinkopf. “Our early stuff was more distorted. We’re sort of maturing as a group.”

Growing up, however, can wait for now.