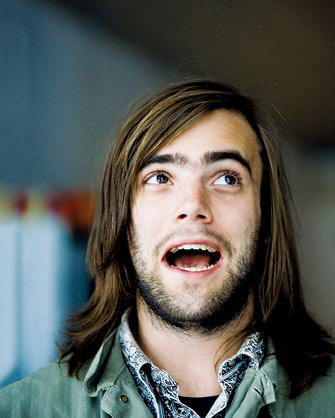 In the credits to his debut album, David Vandervelde acknowledges “inspiration from rock classics.” From thumping opener “Nothin’ No,” it’s clear that T.Rex is one of those inspirations; the Beach Boys harmonies of “Wisdom From A Tree” make another one obvious. But the roots of The Moonstation House Band (Secretly Canadian) run much deeper and in some unexpected directions.

The 22-year-old from Grand Rapids, Mich., grew up on his father’s collection of Beatles, Stones and Buddy Holly records. By the time he was in high school, Vandervelde was making video soundtracks for a nearby church and using the money to subsidize a basement recording studio. His demos with local singer/songwriter Brie Stoner led him to Chicago to work with Wilco’s Jay Bennett, who was hired to produce Stoner’s record at his Pieholden Suite Sound.

“We really had an amazing, mind-melding bonding experience together in the process of recording her record,” says Vandervelde, who was 18 at the time. “It was great to run into someone twice my age who has such a similar mind for music.”

Vandervelde ended up moving to Chicago, living in Bennett’s studio—Bennett slept in one room, Vandervelde in another—and working on records by Mark Eitzel, Jonathan Rice and others. Over the course of two and a half years, Vandervelde made Moonstation while Bennett was recording his own solo album, last year’s The Magnificent Defeat.

“I would describe Jay as my best friend, my brother and my father, all rolled into one,” says Vandervelde. “We have the kind of crazy musical bond where egos aren’t in the way.”

Vandervelde’s work is much trippier and more ragged around the edges than Bennett’s, although they both create a very organic, full-band sound when working alone. Three tracks on Moonstation feature string arrangements from Beck’s father, David Campbell, who heard some of Vandervelde’s soundtrack demos. Vandervelde subsequently went to Los Angeles to work with Campbell at Capitol Records’ legendary Studio A on Hollywood and Vine.

Moonstation echoes classics without mimicking them. Vandervelde admits to thinking of Donovan’s “Wear Your Love Like Heaven” when recording “Jacket,” George Harrison’s “Wah Wah” for “Nothin’ No” and the Left Banke’s “Walk Away Renee” for “Can’t See Your Face No More.”

And the T.Rex influence?

“By no means is that a bad comparison,” says Vandervelde. “What’s kind of funny is that I don’t own a T.Rex record. Jay was the one who introduced me to T.Rex after hearing a couple of my songs. I wasn’t trying to carbon-copy any of their songs or make it cool again. But any band that denies what they’re into is, in my mind, on the wrong track. It should be about embracing music from the past that is influential and that you hold close.”