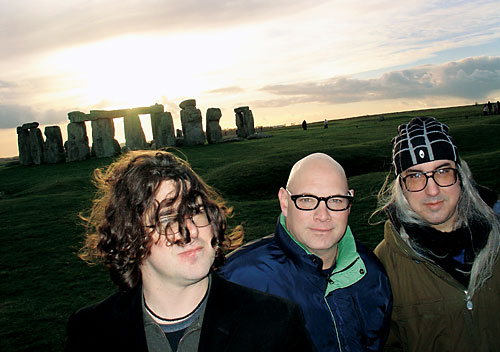 The Seminal Band Reunion is becoming so commonplace that it’s refreshing when one is done right, as they’re so often pathetic, flaccid performances by old farts in it for a quick buck. The old farts know that the sycophants will come out in droves, tongues dragging on the floor as a set of classic songs is phoned in and an unfortunate new album is lapped up. But when it comes to the original lineup of Dinosaur Jr—guitarist J Mascis, bassist Lou Barlow and drummer Murph—and the band’s new studio album, Beyond (Fat Possum), the outcome couldn’t be further from the previously described debacle.

For Dinosaur’s 1985 self-titled debut, Cosloy—who’s employed as Homestead Records’ label manager—coughs up $500 and tells the band Homestead will release whatever it delivers. Dinosaur covers as much stylistic ground as any contemporary underground album, earning the trio its reputation as an East Coast version of the Meat Puppets. Mascis and Barlow apply their introverted weirdness and hardcore roots to all of the music they obsess over: the Cure, the Birthday Party, Neil Young and metal. (“Venom, Motörhead, Raven and, of course, Sabbath,” says Mascis.)

Dinosaur signs to West Coast punk mainstay SST for 1987’s You’re Living All Over Me. The album is recorded so hot and dense with distortion that SST is convinced a major technical problem has afflicted the master tape. Mascis assures SST that it’s supposed to sound that way. Remove Barlow’s acoustic confessional “Poledo,” and the album never lets up, presenting a stark contrast to Dinosaur’s variety. The songs are tight and impenetrably loud, with Mascis’ beautifully emotive caterwaul and wild-ass solos laid across the top of the newly confident, bulldozing rhythm section. “Playing out live,” says Barlow. “That’s why there’s such a difference between the first and second albums.”

Though not a huge touring success, Dinosaur Jr still gains a reputation as one of the loudest bands around. “There were louder bands,” says Barlow. “Swans were much louder. When the Boston hardcore bands slowed down in the mid-’80s and showed up with stacks of amps, that was louder. And Hüsker Dü was just sheets of noise, usually because they were playing to 10 people in a big room. J was an early proponent of the earplug, and I learned to use them later. J was testing out different amp combinations, and it was sometimes just brutal.”

“I had been a drummer, so I wanted the guitar to have the effect of drums, to move air,” says Mascis. “I wanted to feel it in my body.”

Shortly after the release of Living, Dinosaur adds the suffix “Jr” when a band of hippie burnouts known as the Dinosaurs—made up of former members of Jefferson Airplane, the Grateful Dead and Country Joe And The Fish—lays claim to the name.

By the time of 1988’s Bug (a solid effort featuring college-radio hit “Freak Scene”), personal tensions begin to tear Dinosaur Jr apart. The terse, withdrawn Mascis and the neurotic Barlow develop a dysfunctional working relationship, partially due to financial arrangements (Dinosaur’s SST contract awards Mascis all songwriting royalties) but mostly caused by rampant passive-aggressive behavior. Eventually, the two stop speaking to each other. After Barlow engages in some freestyle feedback during a show in Connecticut in 1988, Mascis slugs Barlow with his guitar onstage.

“I was relieved at that point, because I had begun to think that J wasn’t even human,” Barlow told MAGNET in 1996. “It was like, ‘You mean I’ve been bugging you the whole time? All right!’”

Barlow is dismissed from the band in the summer of ‘89: Mascis has Murph tell him the group is breaking up. Soon afterward, however, Dinosaur Jr (with Donna Dresch on bass) takes off for an Australian tour and signs with Sire/Warner Bros.

1991-1997
1991’s Green Mind, the band’s major-label debut, is Dinosaur Jr in name alone; Mascis plays every instrument aside from a few tracks with Murph behind the kit. Released six months before Nirvana’s Nevermind—disproving the common notion that Dinosaur Jr is part of a major-label grunge frenzy—Green Mind sacrifices very little to commercial concerns. Mascis fires on all cylinders. Lead track “The Wagon” is an absurdly catchy song that has nothing to do with grunge. But because of how Nirvana and Pearl Jam inadvertently turn the alternative-rock world on its ear, Dinosaur Jr becomes one of the industry’s great loud hopes on the eve of Where You Been’s 1993 release. Mascis appears on the cover of Spin magazine with the tag line “J Mascis Is God.” Dinosaur Jr—Mascis, Murph and bassist Mike Johnson—is, according to Mascis, “tricked” into occupying a main-stage slot on 1993’s Lollapalooza.

“That was the worst touring experience I’ve ever had,” says Mascis. “We only played three days a week, those days being the hottest of that summer. I didn’t like any of the other bands. Murph was really freaked out by all of it and had to quit when it was over.”

Mascis soldiers on with two more major-label efforts. 1994’s Without A Sound single “Feel The Pain” is pushed via a humorous, Spike Jonze-directed video, in which Mascis plays golf and chases a ball around New York City via a golf cart.1997’s Hand It Over is a layered, big-sounding affair that boasts My Bloody Valentine’s Kevin Shields as an honorary member.

“Hand It Over is my favorite of that period,” says Mascis. “But the distribution and release date were screwed up by the label. We’d get to shows on that tour and people wouldn’t even know we had a new album.”

When asked why the Dinosaur Jr name is retired after Hand It Over, Mascis answers bluntly: “We were dropped. We were supposed to do another album.”

1998-2007
The post-Dinosaur Jr years find Mascis playing on records by other artists (Mark Lanegan, Beachwood Sparks), engaging in side projects (most recently, the stoner-metal Witch) and leading J Mascis + The Fog through two albums of Dinosaur-like guitar frenzy.

Barlow spends the ’90s in Sebadoh, his creative outlet since 1986. Signing to Sub Pop Records in 1992, the solo project-cum-band lasts until 1999 and leaves a respectable discography of heart-on-sleeve lo-fi rock. Barlow parallels Sebadoh with the Folk Implosion, a duo with John Davis that has a fleeting moment of fame in 1995 via the Kids soundtrack’s modern-rock radio hit “Natural One.” In 2005, Barlow releases solo album Emoh on Merge Records, which almost simultaneously reissues Dinosaur Jr’s first three LPs. Somewhat incredibly given the strained friendships (in the post-Dinosaur years, Barlow perpetually reamed Mascis in song lyrics and interviews), Mascis, Barlow and Murph agree to tour again. So what happened?

“We chilled out,” says Mascis.

Drastically raising the bar on reunion tours, the original lineup burns through its live dates, playing material almost exclusively from its first three albums, immediately silencing any doubters with crushing volume and live energy like the trio never broke up. Dinosaur Jr: Live From The Middle East, a DVD from the Boston stop on this tour, offers concert footage, interviews and testimony from fans such as Thurston Moore, Mike Watt and actor Matt Dillon. Apparently, the band was missed: In February, Nike debuted Dinosaur Jr-themed shoes (silver high-tops with purple trim, designed by Mascis) to celebrate its return.

“A new album was decided on sometime during the tour,” says Barlow. “But at first, J and I thought, ‘Why would we want to do that? Why would we want to open ourselves up to interviews and have to deal with all of the review crap?’ We can’t deal with that shit anymore, and we don’t deal with it. But J’s management really pushed it along, and the tour went really well and was a windfall that we weren’t expecting. Things just started to work out on all levels, and it became the next logical thing to do.”

Beyond will be touted as a return to the Homestead/SST glory days, but that isn’t true. The album is a solid set of Mascis compositions that will provide ample satisfaction and even elation to fans who’ve stuck with him through the years. Barlow adds two fantastic contributions: “Back To Your Heart” (which sounds like a lumbering, early-’90s song that just so happens to have Mascis guesting on guitar) and “Lightning Bulb” (which could’ve been on 1999’s criminally underrated The Sebadoh).

“I was very happy to get two songs on the album,” says Barlow, inadvertently bringing up an old point of contention within a band that’s always thrived on discord. “That’s about what I could hope for in the ’80s.”