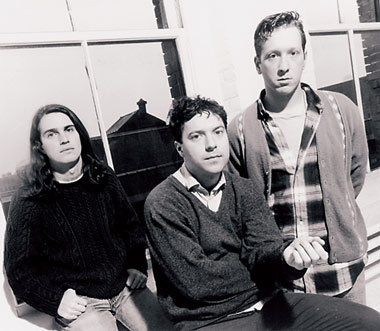 Of all the enduring alt-rock templates to come out of New England’s Fort Apache Studios, 1992’s Let Me Come Over may have suffered the most undeserving fate. While the Pixies’ Come On Pilgrim, Dinosaur Jr’s Bug and the Blake Babies’ Earwig had no literal designs on mass appeal, Buffalo Tom’s third album was the sound of a band clamoring for the next level. Let Me Come Over marked the trio’s transition from the Dinosaur Jr lite of 1988’s Buffalo Tom and 1990’s Birdbrain to a far more imaginative reconciliation of layered psychedelia and Neanderthal noise. From its juiced-up acoustic-to-electric power ballads (“Taillights Fade,” “Mineral,” “Frozen Lake”) to its reliance on mesmerizing melodic repetition, Let Me Come Over is a beautiful, overachieving mess whose moving parts weren’t always well-oiled. Drummer Tom Maginnis’ herky-jerky timekeeping always seems to be trailing just behind the beat. Frontman Bill Janovitz’s lyrics are the convoluted spew of a cooter-crazed UMass dweeb with one ass-cheek on the psychoanalyst’s couch and the other on a barstool, his vocals a half-hollered marvel of overcompensation. On the frenzied “Darl,” bassist Chris Colbourn can be heard whining for his mommy. Which is fitting, because Let Me Come Over is defined by the contradictions between Buffalo Tom’s rock-star aspirations and its inability to stomach the posturing that comes along with it, choosing instead to lay waste to its imperfections with some of the most devastatingly beautiful guitar rock of the ’90s. [www.buffalotom.com]

Yes. This is a completely underrated record. In a perfect world, “Velvet Roof” is a huge hit. How often do recordings like this come out where every song is a keeper!? Just another amazing band laying in wait in the bargain bin. Everything Popular is Wrong ~ Oscar Wilde.

[…] the gift of hindsight, Hobart Rowland of Magnet assessed Let Me Come Over in 2007 and called Janovitz’s lyrics “the convoluted spew […]