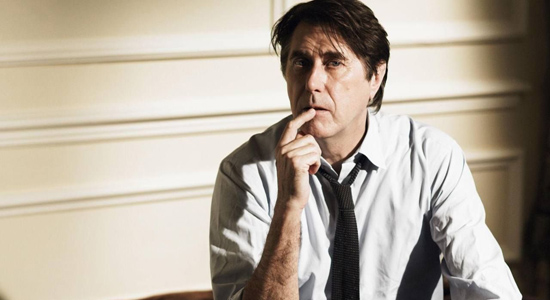 Bryan Ferry is renowned for his slinky demeanor. Both as a solo artist and as the leader of art-rock avatars Roxy Music, the 62-year-old vocalist has made music with panache and fashion sense. Ferry recently reaffirmed his status as both style counselor (he has modeled men’s clothing for British department store Marks & Spencer) and glam icon (via a small role in last year’s Neil Jordan film Breakfast On Pluto).

Ferry is also pop music’s finest interpretive singer. Roxy Music’s only U.K. number-one hit arrived via a 1981 version of John Lennon’s “Jealous Guy,” and Ferry has been covering other musicians’ catalogs since his 1973 solo debut, These Foolish Things, which tackled songs by the Stones, the Beatles, Smokey Robinson and others. Ferry’s silken, wiry baritone has only grown more scuffed and wearily emotive over the years, which is hard to imagine, as he’s long held the patent on smoke-ringed languor.

The brutally beautiful, impressively original Dylanesque (Capitol) is Ferry’s first single-composer covers album. You might assume Bob Dylan is too rustic for Ferry, who resides on a posh estate in rural Sussex, England. But the album’s rumba-like take on “Simple Twist Of Fate” and grizzled version of “Just Like Tom Thumb’s Blues” are so unfussy you can’t help but think of Ferry’s cravat untied and his hair un-lacquered.

Do you subscribe more to the power of myth or the power of fact?
Well, I do think I’ve always been more of a romantic. So myth.

I ask because there’s myth, legend and insinuation that Bryan Ferry is too damned classy to sing so much Bob Dylan—that Dylan’s rhetoric is too dirty and earthen.
[Laughs] Ah, but you must remember also that this Bryan Ferry has the same earthy roots as Bob Dylan.

You once called yourself an “orchid born a coal tip,” as your father was a coal miner and, before that, a farmer in northern England. But do you think that your voice had to age to embrace an album’s worth of Dylan’s gritty material?
Maybe. Then again, it might just be that I’m more confident now than I was in 1973 when I did the first solo record. I suppose, though, with any job or profession, you get a bit better at it with age or get more experience. I think my life itself had to become more of a story to tell—even if you do wind up singing other people’s songs. You have to bring something of a life to those tracks. So you might be able to hit higher notes when you’re younger, but when you’re older, you can hit fewer and lower notes with more conviction.

I don’t doubt your lord-of-the-manor stature at all. Not one bit.
Now there’s a myth. Then again, it depends what manor.

And what lording. So what do you do to get your hands dirty?
[Long pause] That is a good question. I do try to avoid that level of work whenever possible. Though I’m not averse to doing the washing up when it’s required. As far as getting the spade out and digging out the garden … well, I simply don’t have the time to do it. But I would be up for a bit of supervising.

You seem like a guy who tends to ruminate on your recording process. How did you finish Dylanesque in a week?
I don’t really know. I sometimes have a habit of making things difficult for myself. I think I might do that more with new songs of my own. Recording has been, for me, a rather angst-filled process.

What the heck is wrong with you?
Normally, I write while I record. I don’t have these set things before I go into the studio. But doing songs from the 1930s or those written by Bob Dylan, I can just take to the studio effortlessly. Perhaps because I had just toured with [the backing band on Dylanesque]. I guess it’s because the material is so strong. How can it not work?

Which Dylan song was the most difficult for you to execute?
“The Times They Are A-Changin’.” Everything else was so straightforward, then you get to that. And “All I Really Want To Do” because there you’re covering two people; not only Dylan but the Byrds’ version. I wanted to nod to both ways, really.

Your son Otis (a fox-hunting, live-off-the-land lobbyist) is quite the political activist. Your son Isaac (a model) is a bit of a bon vivant. Dare I ask which one takes after you the most?
I have other boys, too. Isaac works with me in the studio, despite keeping those late hours. Otis lives far away in the deep countryside. I’m proud of his convictions and the ways in which he lives most of his life. I applaud it; he’s very passionate about what he does. Such a great countryman he is. People who live in the cities all the time don’t really ever get it. Though I must say he is great at converting people, explaining the lifestyle.

There I am in the theater watching Breakfast On Pluto …
Oh no … minding your own business, I’m sure.

And there’s you choking that poor Cillian Murphy. You were immensely creepy. How did Neil Jordan get to you for that?
He really did just ring me and said he had a part in a movie that he’d thought of me for. It wasn’t a big chunk out of my life. Two freezing nights in Dublin’s back streets. I mean, it’s not how I see myself going.

What, choking transvestites? Would you like to be considered for more …
Creepy roles? [Laughs] I probably would, actually. As you get older, it’s fun to diversify a bit. That’s been, honestly, a feature of my life; I’ve tried to broaden my canvas whether it’s my solo albums or my songs in Roxy Music. It’s always about variety in my life. I like the city, but I like the country, where I’m away from urban pressures. I like London. I like New York.

How do you think your American audience views you after all this time?
Oh, god … a guy in a suit who sings. It’s always the style thing. But all my heroes were sharply dressed. The bebop guys. The concerts I saw as a lad: Count Basie, Dizzy Gillespie. The Modern Jazz Quartet was always incredibly elegant.

You mentioned Roxy Music a moment ago. You seem to vacillate between eschewing the reunion mentality and embracing it. What gives?
After that one small tour (in 2006), we did some recording that went quite good. But I didn’t want to spend all my time on the Roxy project—I like it in spurts—so I’ll come back to it after the Dylan project. I want to make it right.

The nuance you lend some of Dylan’s songs is gorgeous. Are you a Dylan fanatic?
Not a freak, no. But I do admire that poetry, especially the earliest stuff, the ’60s songs.