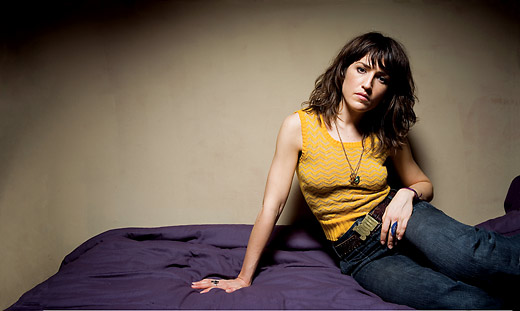 As a young punk rocker in early-’90s Boston, Joan Wasser had what she calls a “tough-card problem.” Playing violin for indie outfit the Dambuilders, she kept her instrument loud and distorted (despite years of intense classical training at Boston University) and screamed and bellowed as loudly as the boys.

“When I started playing music in bands, there weren’t as many girls around,” says the 36-year-old Wasser from her home in Brooklyn, where she’s lived since 1996. “I had to be as strong. I needed to be able to lift my cabinet. I needed to be as wild as anyone else.”

Screaming, wild anger seems like the last thing on Wasser’s mind these days, however. Her band, Joan As Police Woman, focuses on creating lush, cabaret-style pieces awash in opulent orchestration. Her debut record under that moniker, Real Life (on Cheap Lullaby; it was released in Europe last summer by the Reveal label), centers on her voice, a gentle alto that’s as slippery as a velvet drape. For Wasser, renouncing her angst has been a long, emotionally intense process. Punk rock allowed her an illusion of strength, but songwriting was how she truly found her muse.

Much of Wasser’s musical shift began in 1997, when she lost her boyfriend Jeff Buckley to the waters of the Wolf River Marina. To deal with the grief, Wasser teamed up with Buckley’s bandmates, including guitarist Michael Tighe and bassist Parker Kindred, and started writing songs under the name Black Beetle. The group marked her first outing as a lead vocalist.

“I’d been onstage for so much of my life, but I was terrified of singing,” says Wasser. “Black Beetle caused me to face a lot of fears, like the whole thing about being obsessed with being tough enough. Even just the fact that I was scared at all; I wasn’t supposed to be afraid of anything. To be able to honestly and completely count on yourself musically was terrifying, but it was really great. I realized that I wanted to be a bandleader, not a partial bandleader.”

Over the next few years, Wasser played violin with Antony And The Johnsons, teaching herself guitar and piano on the side. When writing songs, she set aside her violin and worked exclusively on the new instruments. To this day, she only plays violin for Joan As Police Woman on recordings, never in a live setting.

“It’s so creative to play an instrument you can’t play,” she says. “You don’t know where you’re going, so it’s like walking through a city you don’t know. You’re not looking for anything in particular. You’re exploring.”

In 2004, Rufus Wainwright invited Wasser to join his band and asked Joan As Police Woman to be the opening act on his European tour. Impressed by one of these shows, Tom Rose, owner of Derby, England, record shop Reveal Records, offered to make her eponymous self-titled EP the first release on his new label. Last year, Wasser spent seven months touring to support Real Life in Europe, where the album garnered overwhelmingly positive reviews and wound up on a number of best-of lists.

Real Life’s lyrical content offers simple sentiments that convey the image of a woman standing strong as a torrent of emotions swirl around her. “I’ve been on the ride before/It never stops at all,” sings Wasser on “The Ride” atop gentle, adult-contemporary piano. Drummer Ben Perowsky and bassist Rainy Orteca set up unobtrusive rhythms, Joseph Arthur contributes graveled background vocals, and horns add brief flashes of color, as on the sensuous “Save Me.” When Antony soars in to duet on “I Defy,” his voice touches Wasser’s like water and sky at the horizon.

The Joan As Police Woman Web site features the slogan “Beauty is the new punk rock,” a line that Wasser brandishes to contextualize her music in the 21st century. On Real Life, Wasser offers her own fear and honesty. In an era of isolation, it’s truly transgressive to invite open connections with other people.

“The government has done a fantastic job of creating fear, like placing the public announcements in every train station about suspicious packages,” she says. “We need trust back. Being open and honest feels subversive in the way that being angry once felt subversive.”

One reply on “Joan As Police Woman: Get Real”

this artist is fuckin amazin!