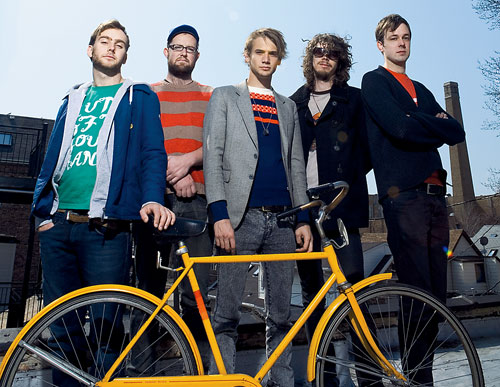 If Eddie Murphy has taught us anything, it’s that coming to America can be a scary, satisfying ride. In a one-week span, Sydney, Australia’s Dappled Cities have been spanked by Amazonian women at a roller derby in Austin, Texas, and hassled by residents of the housing projects of Chicago. On top of that, after co-frontmen Tim Derricourt and Dave Rennick were mistaken for Wayne Coyne’s backing vocalists during a visit to a television studio, they wound up performing with the Flaming Lips singer. To be fair, Derricourt blames his beanie (“with a tiny stuffed bear stitched to the front”) for attracting the attention in the Windy City, and the two other events occurred during Austin’s annual South By Southwest music festival, a veritable celebration of the anything-goes attitude. And to clarify further, this isn’t the first time the five lads in Dappled Cities have turned up Stateside.

“You can keep releasing albums in Australia, but it’s America where more excitement is happening,” says Derricourt, who splits songwriting duties with Rennick. (Both sing and play guitars and keyboards.) “There are more bands touring and more great people to meet to get more exposed.”

Dappled Cities garnered the necessary exposure at last year’s SXSW festival, where the strength of their live shows lured interest from Dangerbird Records, home to Silversun Pickups and La Rocca. After inking a deal, the band—which also includes bassist Alex Moore, drummer Hugh Boyce and keyboardist Ned Cooke—returned to Sydney for a bit of woodshedding before a month-long stay in Los Angeles to record sophomore album Granddance. The nomenclature is coincidental, but the group tapped former Grandaddy guitarist Jim Fairchild and Dangerbird labelmate Peter Walker to produce the record.

“We introduced keyboards to this new album,” says Derricourt concerning Fairchild’s guidance in the studio. “Before, it was more guitar-noodly. We spent a lot of time experimenting with new keyboard sounds and effects.”

Granddance brings to mind the majestic production qualities of Mercury Rev and the Flaming Lips without neglecting Dappled Cities’ Australian roots. Album centerpiece “Vision Bell,” with its flights of falsetto vocals, could slide right into a set by fellow countrymen the Sleepy Jackson. Alternatively, the layered shrieks and anthemic drums of “Colour Coding” are informed by Arcade Fire. Mentioning these bands to Derricourt elicits little reaction, but it’s understandable considering his unique inspirations.

“It sounds really stupid to be in a rock band and not own a lot of records,” he says. “A lot of my musical influence comes from film soundtracks and walking around the street. A lot of my melodies come from the way a car starts or the way someone shouts.”

Derricourt carries a tape recorder at all times, just in case everyday sounds lead to a new verse, bass line or drum beat. Which prompts the question: If you’re singing to yourself in the middle of the street, does anyone notice?

“When you’re walking around with this mangulated sound coming out of a dictaphone and you see the looks of people staring at you,” he says, “you’re thinking, ‘Stare away. You’ll love this one day, maybe.’”