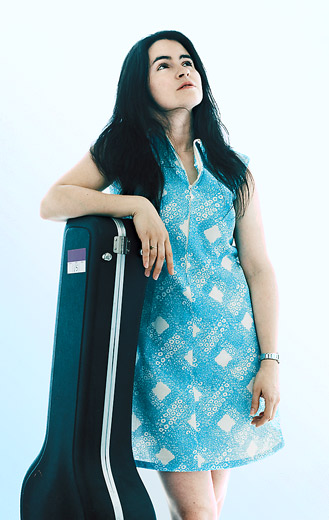 As a founding member of the Delgados, singer/guitarist Emma Pollock used her soaring voice and intricate songwriting to place the Glasgow band beside Belle And Sebastian at the forefront of Scottish pop. Through their Chemikal Under-ground label, the Delgados launched Mogwai, Arab Strap and Bis. On solo debut Watch The Fireworks (4AD), Pollock’s sincere, searching lyrics and aching melodies remain the focus.

IAN MENZIES & HIS CLYDE VALLEY STOMPERS “Salty Dog” (1959)
My dad was a jazz clarinet and saxophone player. He used to play this song quite a bit, and it was one of my mom’s favorite tracks. The Stompers are from Clyde Valley, which is just outside Glasgow in the country, and this is just a great trad-jazz song that I used to dance around to. I have early memories of it being my favorite song when I was seven or eight. The vocalist is Fionna Duncan, and she’s got a really raucous voice.

NEW ORDER “Ceremony” (1981)
New Order was one of the first bands that really made me take music seriously. A friend at high school gave me the compilation album Substance. I was probably 16 years old, and it was one of the coolest—and I don’t use that word very often—sounds I had ever heard. It was just so precise, so confident. This record inspired me to start playing guitar after my dad gave me a classical guitar as a present. Because Peter Hook’s bass lines are so incredibly melodic and sensuous, they were really easy for me to play. And being 16, that’s the time when the music you hear defines what you listen to for the rest of your life.

KATE BUSH “The Man With The Child In His Eyes” (1978)
She has an incredible sense of melody, and there’s nothing predictable about what she does. This is a song that I would love to write, actually. It’s very pure, just the one instrument and vocals. On one of her recent albums, she has a song called “Pi,” where she sings the number pi over and over again in the chorus. There’s another song where she sings “washing machine” quite a bit in the chorus, and I don’t know anyone else who could get away with that.

BILLIE HOLIDAY “I’m A Fool To Want You” (1958)
This is off Lady In Satin, which is one of my favorite Billie Holiday albums because it’s got a lot of beautiful orchestral arrangements. The reissue has extra tracks on which you hear her making mistakes and having to start again. I’m sure she wasn’t very proud of the mistakes, but I quite like hearing her stop and say, “No, no, no, we’re gonna have to start that again.” It’s funny to hear a wee snippet of her working. It was one of the last tracks she made before she died in 1959. But the reason this song is so important to me is because it’s the very first song I heard after my son was born, when I was still in the hospital. My husband (Delgados drummer Paul Savage) brought me this album because he knew I liked it so much, and when I heard the opening to this song, I just started crying. I’ll have to ask my son when he’s older if this song means anything to him.

THE KINKS “Picture Book” (1968)
We listened to The Village Green Preservation Society a lot in the Chemikal Underground office, and “Picture Book” is just one example of a great track from the album. Ray Davies had a real talent to talk about things in music without turning to the clichés of boy meets girl, fall in love, break up and all that. Village Green captures an England that a lot of people imagine but doesn’t really exist: a quintessential England where the village green is the center of society. Even though Davies didn’t live that kind of life when he was growing up, he fantasized about it. People go on about the Stones versus the Beatles, but I prefer the Kinks and think they’re underrated in comparison.

LUDOVICO EINAUDI “Le Onde” (1996)
Einaudi is a contemporary Italian pianist. I was in a record store in Glasgow, and Le Onde was on the listening booth. I was really surprised because I thought, “Wow, this is contemporary classical music but it doesn’t sound pretentious or inaccessible or like I’d need a music degree to get it.” It’s actually the kind of piano that Mogwai would use, because it’s contemporary while still retaining something old and otherworldly and timeless about it. And it’s very, very dark.

PJ HARVEY “Dress” (1992)
I first heard Dry when I was at university in Oxford; I was doing research on lasers, I did a degree in physics. I would walk to the train listening to the album. I couldn’t get over how unique it was. “Dress” is a very abrasive song; there’s huge dynamics in it. My husband did the same course at university, and “Dress” reminds me of when he and I first met. Paul actually gave me the album. He said, “You should hear this, it’s great.” He was right.