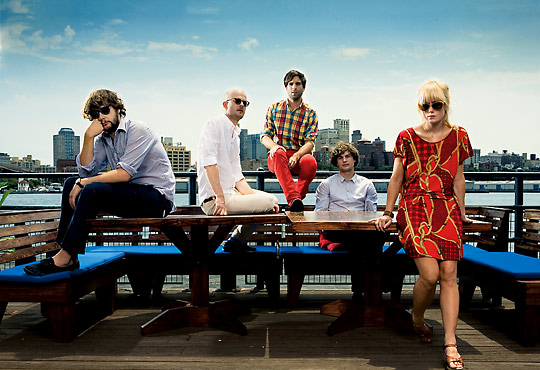 Anyone hiring Adam Olenius for his graphic-design skills has certainly picked the right man for the job. “If I do something, I have to do it 100 percent, and when I put my mind to design, I want to do it really well,” says the Stockholm-based art-school graduate, who’s conceived splashy prints for nightclubs, art galleries and fellow musicians like Stina Nordenstam. Not to mention, of course, all the T-shirts, tour posters and CD-booklet work for his peppy alt-pop combo Shout Out Louds, which initially started as a mere side project to the singer/guitarist’s art career. “I’m not a painter, per se,” says Olenius. “I’m more into cutting and pasting; I combine everything in collage.”

Still, Olenius’ catalog is quite varied. For their university thesis, he and Shout Out Louds guitarist Carl Von Arbin constructed a shallow pool of liquid copper, rigged it with amplifiers and lights, and blasted Björk’s “Human Behaviour” through it to demonstrate how sound travels through eardrums. Olenius also sketched streetlight-illuminated superhero silhouettes of his bandmates for their 2005 debut, Howl Howl Gaff Gaff, and reconfigured dusty old semaphore-signal flags for their latest album, Our Ill Wills (Merge). Bassist Ted Malmros has filmed most of the band’s videos, and keyboardist Bebban Stenborg is a short-story writer. The group has enough creative talent to launch its own advertising agency.

“We could,” grins Olenius, scratching his stubbly chin. “And Eric (Edman, drummer and ex-economics student) could take care of the money. It’s a good idea. So good, in fact, that it seems we already have a company. It’s called Rutan Tutan, and it’s brand new. We just started it two weeks ago. I’m doing the logo, but it’s not done yet. It’ll look like something from the ’50s: a factory logo that’s very square-ish and heavy-metal industrial.”

Rutan Tutan—named for a popular Swedish bread—was launched for simple tax purposes. “Because we don’t make a lot of money, we need something to officially keep track of whatever comes in,” says Stenborg, who recently published one of her ghost stories in Sweden’s leading literary magazine. “But we trust each other’s ideas so much already, I think it’s a really good idea for the future. So now it’s about money and the band. Later—art!”

Olenius adores the collage pieces of Max Ernst, who juxtaposed Victorian engravings in stark, surreal ways. Stenborg, meanwhile, favors the faux-Edwardian drawings of Edward Gorey, especially his Gashlycrumb Tinies alphabet book, in which children are assaulted by bears and done in by ennui. Stenborg is also a devout diarist, scribbling notes in her journals at least once a day.

“I think the really interesting thing about art is seeing all the things you do as assignments,” says Stenborg. “For instance, I like to do installments back home—just putting things where people will be surprised to see them, as if the object just showed up there on its own.”

Our Ill Wills might be the band members’ ultimate project. Produced by Peter Bjorn And John’s brainy multi-instrumentalist Bjorn Yttling, the set ripples with more euphonic rhythms than the aforementioned Björk pool, bouncing from buoyant, Cure-toned opener “Tonight I Have To Leave It” and Stenborg’s Nico-frosty showcase “Blue Headlights” to the folk-jangled jitter of “Normandie” and the decidedly New Order-ish “Hard Rain.” Olenius’ Robert Smith-like voice is adorably yelpy and off-kilter, helping Shout Out Louds to emerge with pop so picture-perfect it should be hanging in a museum.

“I’ll do my art and graphic design from time to time, but what I really do every day is songwriting,” says Olenius. “I think sometimes songwriting isn’t so different from a (design) assignment. So the world we try to create with our albums is kind of our assignment. For instance, we knew this time before we entered the studio that we wanted to focus more on the rhythm and the atmosphere.”

As for the nautical aura surrounding Our Ill Wills, blame it on the band’s Stockholm rehearsal space.

“It’s actually a basement underneath an old naval hotel,” says Olenius. “It’s really beautiful, with lots of old paintings of ships and submarines and a big archive of old photos from the ’20s and ’30s. The signal flags on the cover are everywhere in that building, representing the idea of communication in music, combined with the sea. And being on tour and being away for a long time, sometimes you feel like a sailor. You go to different ports and come back with jewelry, strange food, maybe even some strange animals in cages. So that’s the general theme of the record.”