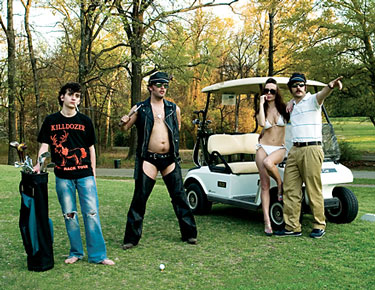 Judging from the volume and content of letters submitted to MAGNET over the past few years, readers will be either delighted or appalled to learn that contributing writer Andrew Earles (author of Where’s The Street Team?) has signed to Matador to issue a comedy CD. Earles & Jensen Present: Just Farr A Laugh Vol. 1 And 2, due in April, consists of prank phone calls by Earles and partner Jeffrey Jensen. Listeners expecting Jerky Boys-style locker-room humor will be disappointed; the duo instead traffics in slow-developing, character-driven calls. One features the singer of a smooth-R&B cover band called Bedroom ETA attempting to secure a gig at a Memphis blues club, while another has a junk-collector type attempting to sell Garfield memorabilia to an antiques dealer.

“We wanted to make a different type of prank-call CD,” says Earles. “One devoid of cruelty and overstuffed with pop-culture references.”

The two-disc set compiles 2002’s Vol. 1 (previously issued on Earles’ Failed Pilot label, and whose cover drawing of actor Jamie Farr is responsible for the titular pun) and a new collection of calls. Just Farr A Laugh, Matador’s first comedy release, is packaged with a 60-page book featuring artwork by Devendra Banhart and Matt Sweeney (Chavez), as well as writing by Neil Hamburger and Neal Pollack. Fans of Vol. 1 will also be pleased that the character of Bleachy—a 4’10”, 250-pound gobbler of Rally’s Big Buford hamburgers—returns for Vol. 2.

Earles explains the birth of Bleachy: “We spent an afternoon in Memphis looking through the phone book for what appeared to be single African-American women. Jeff was calling them as a Babyface-style ladykiller and asking if they wanted to ‘make love on the hood of my Ford Taurus.’ We found the name Bleachy Washington.

The character just came out of Jeff’s head from there, resulting in 30 or 40 calls on that day alone.”

Earles will continue to pen MAGNET’s Street Team column, and he has a message for those outraged at the skewering of their beloved bands.

“I invite readers to stop taking it so seriously,” he says. “It is a writing persona of sorts, one that I did years ago with my zine, The Cimarron Weekend. Nasty or caustic criticism has become old hat, and I don’t want to get typecast in that ghetto. That’s why I try to incorporate goofy humor and a little heart into it. Do I succeed at this? Not sure.”