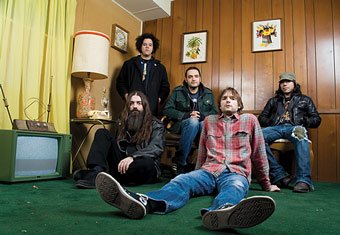 When Slint re-formed in 2005 for a string of live performances, fans of the seminal Louisville, Ky., post-rock band might’ve anticipated a possible new album. Guitarist David Pajo reveals that plans were indeed made for recording, except those plans had very little to do with Slint.

“Michael McMahan (guitarist for Slint reunion), Todd Cook (bass) and I lightheartedly discussed continuing to play together after the Slint tour,” says Pajo. “Weeks later, Todd turned to me in the van and said, ‘Do you know what a good name for a metal band is? Dead Child.’”

Dahm succinctly describes it as “serious heavy assault. This is not a joke.”

“I wanted to go back to the kind of artless, chops-oriented music that got me jumping off the walls when I was a kid,” says Pajo. “Music should be about stripping away the layers of bullshit on it. In another world, Delta blues and folk were the purest forms of music. But the modern folk and blues scenes are so pretentious and twee that no one can stand being next to it. In our time, metal has replaced folk music as the voice of the common man.”