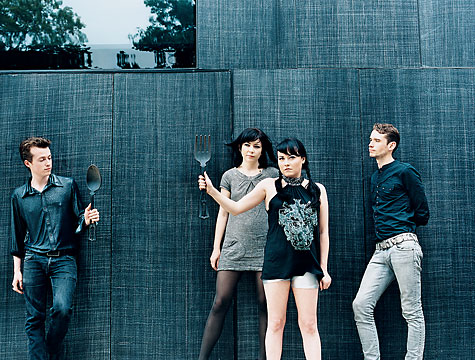 Glasgow wasn’t always bursting with great bands. Before Belle And Sebastian and Franz Ferdinand, it had been some time since the Scottish city put anything noteworthy on the musical map. Yet when Adele Bethel and Scott Paterson were growing up, Glasgow still had some credibility.

“Teenage Fanclub, Jesus And Mary Chain and Aztec Camera are the bands I really loved when I was younger,” says Bethel. “And Glasgow is so small, they were all from down the street.”

But when singers/guitarists Bethel and Paterson teamed with bassist Ailidh Lennon and drummer David Gow to form Sons & Daughters in 2000, they didn’t take cues from their indie-pop neighbors. Instead, Paterson found inspiration in rockabilly, early R&B and rootsy, greasy garage; Bethel’s lyrics were born out of similar stews: murder ballads, blues laments and noir narratives. While a current wave of American bands revels in the exoticism of Brit folk’s intricate fingerpicking and magickal mythologies, Sons & Daughters turn their gaze back across the Atlantic.

“There’s a real overfamiliarity [with British folk] at home,” says Bethel. “You end up finding it a little forced. In Scotland at New Year’s, they have these tacky Scottish folk singers, singing about the bonny hills or a wizard or something. So you could take the interest in the blues as a rebellion against our parents, I suppose. [American] music and those kind of stories are more exotic to us. It’s cooler, darker and feels like it has more real substance and soul.”

Paterson, too, says a “romantic vision of a darker America” informs much of his songwriting.

“The idea was to use everyone to their full potential,” says Bethel. “So in some cases, my voice was raised by three tones … which wasn’t easy. I had to see a singing teacher, but it helped me.”

Several months spent writing in a house near the Scottish Highlands produced more complex material than on 2005’s The Repulsion Box, a sophomore LP that was written during sound checks on the road. Having

Butler at the controls also resulted in epic battles over how songs should sound.

“He’s a great guy, socially,” says Paterson. “But in the studio, he was kind of a nightmare. There’s only one way with Bernard: his way. We’re both guitarists, and there would be screaming arguments. But this absolutely made it a better record.”

This Gift reveals influences and styles the band has never shown before, such as krautrock closer “Goodbye Service” and the raw Stooges ripper that is the title track. While Sons & Daughters have hinted at girl-group harmonies in the past, “Rebel With The Ghost” is a true Northern Soul-style rocker, complete with a slightly tinny effect on Bethel’s verses and a full chorus of “na-na-na”s. Then there’s the Smiths-y “Iodine” and “The Bell,” on which Paterson used Johnny Marr’s 12-string from the Strangeways, Here We Come sessions. The guitar was a gift from Marr to Butler, a Smiths devotee. “It was like the story of Excalibur,” laughs Paterson on how he came to play his hero’s axe.

While Sons & Daughters’ music doesn’t seem like a natural fit with Morrissey and Marr’s storied pop, everyone in the band is a Smiths fanatic. When asked two years ago to open for Morrissey on a small-venue tour of the U.K., they were beside themselves.

“The Queen Is Dead changed my life,” says Bethel. “But you think you’re a big Smiths fan until you see the view from the stage at one of these shows. You see the real diehards.”

Other influences on This Gift include Blondie and the Velvet Underground. Butler was able to tease a brighter, poppier feel from Sons & Daughters that, on many tracks, does indeed channel both Blondie’s early, bubbly sound and the Velvets’ shambling pop.

“We wanted it to be an all-encompassing album,” says Paterson. “Not an assault on your eardrums, but a widening of the sonic palette.”

In an era of instantly obsolete blog bands, Sons & Daughters are a unique case. Just three records into their career, they’re still growing into a more artistically mature outfit. Of course, it’s not all rosy.

“Now I have to use a whole rack of (effects) pedals,” says Paterson. “I never used any fucking pedals before.”