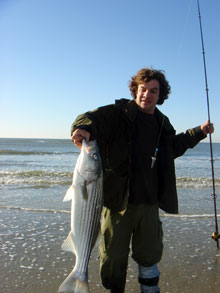 Aside from being half of Ween, you’re an avid angler and host of Brownie Troop Fishing Show (watch episodes here), where you cast lines with fans and friends like the Butthole Surfers’ Gibby Haynes. What’s the weirdest fish (or non-fish) you ever reeled in?

I have caught a lot of seagulls in my line. Anyone who fishes in saltwater has had this happen to them. I’ve also caught everything from children’s toys to the grille from a ’72 Cadillac Coupe de Ville. This summer at the New Jersey shore, I caught a burrfish, a type of pufferfish that rarely comes north of the Carolinas. It took four people and finally a Peterson Field Guide To Atlan-tic Coast Fishes to identify it. They printed a picture of it in the Atlantic City newspaper the next Sunday. Later that same day, I caught a gigantic cow-nosed stingray; it had a four-foot wingspan and took a half-hour to land.