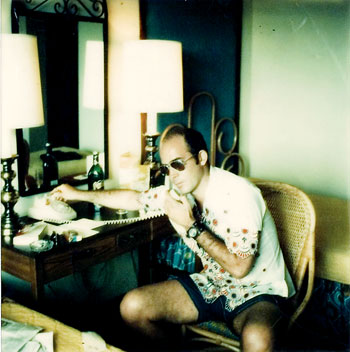 Best to put it forthrightly: The release of Hunter S. Thompson’s home recordings is an auspicious event in the contexts of both audiophile culture and contemporary literature. To begin with, there’s the obvious historical significance. Thompson, author of Fear And Loathing In Las Vegas and the founder of so-called gonzo journalism, was an obsessive home and field recorder, a writer whose purposefully chaotic final drafts masked the determined if often frenzied method by which his best work came together.

Thompson’s private recordings have been common knowledge among fans for years; he continued to make them right up until his suicide by gunshot in 2005. But when director Alex Gibney began researching source material for his recent documentary Gonzo: The Life And Work Of Dr. Hunter S. Thompson, the tapes, stored in Thompson’s Woody Creek, Colo., home, were made available to an outside party for the first time.

Drawn from a period (1965-1975) that roughly matches the narrative arc of Gibney’s documentary, The Gonzo Tapes (Shout! Factory) collects five CDs’ worth of home and field recordings, tapes of phone conversations, drug-fueled monologues, interviews, arguments, outlines and on-the-spot notes for stories, all recorded by Thompson himself. The set chronicles the time Thompson spent writing 1966’s Hell’s Angels and 1972’s Fear And Loathing In Las Vegas, as well as the chaotic period immediately following his coverage of the ’72 presidential campaign, when his output became increasingly sporadic. Opening with the methodical and surprisingly cogent notes for Hell’s Angels, the set ends with shambolic recordings from two notorious unfinished projects for Rolling Stone: the Muhammad Ali/George Foreman fight in Zaire in 1974 and the fall of Saigon in 1975. Two discs from the Las Vegas book provide The Gonzo Tapes’ most historically important material, not to mention its funniest and most deranged moments.

Producer Don Fleming (Sonic Youth, Screaming Trees), now with the Alan Lomax Archives, was initially brought aboard to archive and select material for Gibney’s film. Midway through the making of the documentary, however, the sheer wealth of the previously unheard cache of recordings became apparent. Fleming thereafter continued his work with one eye toward an official audio release.

“[Thompson] wrote dates on every single tape, which is very rare to see if you do this kind of archival work,” says Fleming. “Not only that, he’ll often start recordings by saying, ‘OK, it’s Sunday morning, 4 a.m., December 14.’ I was very lucky in that regard. He was meticulous about keeping a timeline, even when everything was clearly falling apart around him. Like in the tapes from the Ali/Foreman fight in 1974. He missed the fight entirely, but he kept rolling tape right up through the flight home, even after the story for Rolling Stone had been aborted.”

No contemporary writer chronicled his own composition process as compulsively as Thompson; several of his spur-of-the-moment observations collected here, in fact, made their way into his final drafts. As a glimpse into that process—and these are working notes for stories, not incoherent jabberings, even when his thoughts become increasingly frantic toward the end of the set—The Gonzo Tapes provides insight that the ongoing collection of Thompson’s letters and last articles can’t begin to reveal.