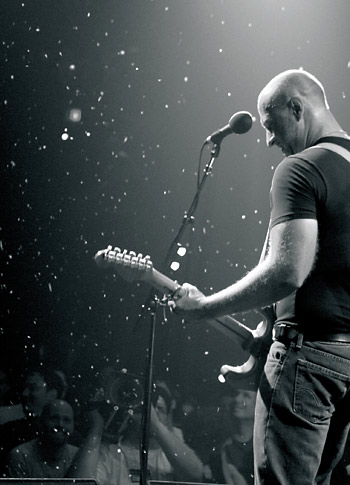 After the greatness of Hüsker Dü and the first Sugar album, Bob Mould could have retired an indie-rock legend. Instead, he chose to to release a bunch of mediocre albums and write scripts for World Championship Wrestling (or, as the kids like to call it, WCW). But with 2005’s Body Of Song and last year’s District Line, Mould started to get his groove back. This trend thankfully continues with his still-untitled eighth solo album, due out April 7 on the Anti- label. The LP features Mould on lots of instruments plus Jon Wurster on drums, and it’s almost certainly Mould’s best since Sugar’s sophomore album, 1994’s File Under: Easy Listening. Mould’s label calls the record “honest and personal,” and they aren’t kidding. With lyrics such as “The taste of last night’s sex still in my mouth” (“Bad Blood Better”) and “Lead me to the Sanifair/Reach into my underwear” (“Argos”), we’re betting homophobic Mould fans won’t being singing along when he plays the new stuff live. Track listing after the jump.

Need to be aroused further? Check out this interview we did with Mould last year.

I love Bob Mould. Can’t wait for his new album… and all the dirty lyrics. The man has always offered his life to his audience, and come to think of it, sex is a huge part of life. I’m glad to know that he thinks we’re worthy of listening to his experiences, in fact. (By the way, Workbook and Bob Mould are far from mediocre…)

The Last Dog & Pony Show is an excellent album (except for 1 song).

I believe the reviewer thinks that if your ears don’t bleed after listening to a Bob Mould Album. Sure, the electronic stuff isn’t my bag, but even the more electronic influenced songs play great live! If you haven’t seen Bob live, and get the chance, GO! Last year, he played about 7 Husker Du songs (mostly from Zen Arcade and Candy Apple Gray) and the crowd started slam dancing (some of us are too old to call it a mosh pit)

I’m psyched for the new album!

Mould’s album “Modulate” is utterly, breathtakingly brilliant. Whether people realize it or not, whether or not they want to acknowledge it (or would rather hold on to the tired “Mould’s work between Sugar and recently was sub-par” trope), he made a breakthrough album that set the tone for nearly a decade of rock-plus-electronica albums that followed. The “great new sounds” by fill-in-the-blank new-in-the-2000s superstars came after him.