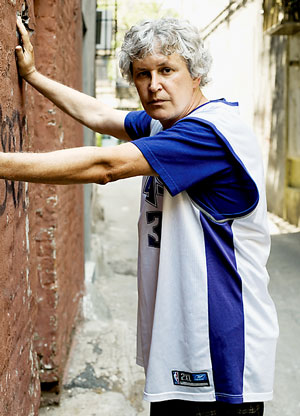 Following our own advice, we’re not going to say anything about how prolific Robert Pollard is. We’re just going to pass along the information that Pollard has, at the moment, six platters planned for 2009. (We wouldn’t complain if he added a Keene Brothers effort as number seven. Just saying.) The list:
January 20: Robert Pollard, The Crawling Distance
February 17: Boston Spaceships, The Planets Are Blasted
April: Circus Devils, Gringo
June: Cosmos, Jar Of Jam Ton Of Bricks
August: Robert Pollard, Elephant Jokes
October: Boston Spaceships, Zero To 99

The most intriguing release is the Cosmos LP, a “postal rock” collaboration with Australian singer/songwriter Richard Davies of Cardinal and Moles fame (relatively speaking). As usual with this kind of Pollard project, Pollard wrote lyrics and melodies, singing over Davies’ backing tracks. The difference with Jar Of Jam Ton Of Bricks is that it will include four tunes Davies submitted with his vocals that Pollard elected to keep as is.

“Canned Food Demons” from Boston Spaceships’ The Planets Are Blasted:

“Every Moment Flame On” from Circus Devils’ Gringo:

I believe it might finally be time to give up everything and just go to work for Bob. I would probably come out ahead in the end. This guy is the equivalent of a musical drug addiction. Except addicts usually wish they hadn’t become addicts. I just overdosed on a blasted planet.

ive been on a Pollard binge for almost a whole year now…not in my airforce is currently rocking me.

What would life be like without Pollard. It took me a while to get into, but now that I am in, I celebrate every new album. I am embarrassed out how excited I get to receive Bob’s new releases… and amazed at how he surpasses my highest expectations every time…. This guy is a living rock icon and no one knows it….yet.