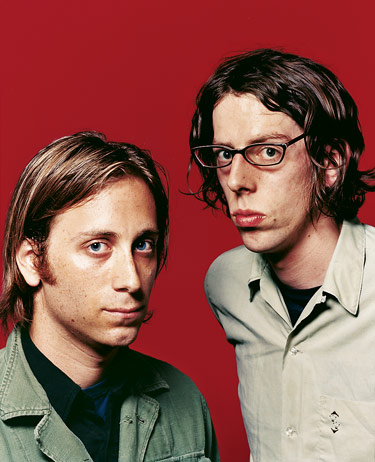 Dan Auerbach—the Black Keys‘ Jack White to Patrick Carney’s Meg White (instrumentally speaking)—is putting out a solo album February 1, then following it up with a 10-date tour. Keep It Hid, a solid 14-track LP that’s slightly more experimental than the Black Keys, was written, recorded, produced and engineered by Auerbach (pictured left), who also played most of the instruments. (We can’t confirm the rumor that Auerbach also made finger sandwiches and tea for the handful musicians who guested on the record, but we think he did.) Keep It Hid comes on the heels of a big 2008 for the Black Keys, who released the acclaimed Attack And Release (OK, so it wasn’t really acclaimed by us) in April and The Black Keys Live At The Crystal Ballroom (a DVD directed by Lance Bangs, a.k.a. Mr. Corin Tucker) in November. Auerbach’s tour dates are after the jump.

To read about the time Auerbach and Carney lured an unsuspecting vegetarian MAGNET writer to Akron, Ohio, and then forced him to eat meat against his will, click here.

“I Want Some More” from Keep It Hid:

Ive never heard such an ignorant article on TBK. Starting it off by comparing them to the White Stripes? Really? They sound nothing like them and hate the comparison. Do all trios sound alike too?

Well said John, I too am sick of this comparison.

Hey Guys relax. I know that The Black Keys don’t sound like the White Stripes, but I don’t think that’s the intention of the author. I think that person meant that Dan is like Jack in the sense that he plays the guitar and sings while Patrick is like Meg because he is the drummer (hence why they said instrumentally speaking). I just want to say Congrats on the new album guys! I just finished listening to Brothers on NPR and I’m impressed. I think this group has always done a good job with sticking to their genre and not conforming to make pop hits etc. And coincidently on another note Congrats to The Dead Weather (the other band that Jack White is in) for putting together their album as well.