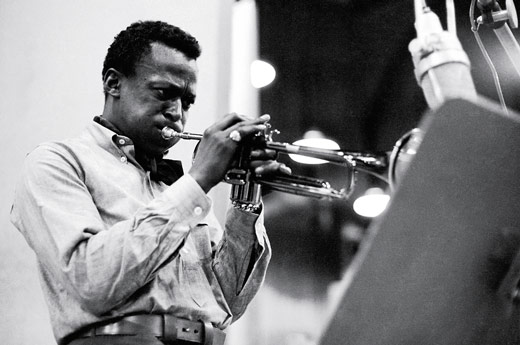 Kind Of Blue, not just one of the highlights of Miles Davis‘ stellar career but an important milestone in the lifeline of jazz, is being reissued this month by Columbia/Legacy as a two-CD/one-DVD set to celebrate the album’s 50th anniversary.

Recorded in 1958 by the trumpet legend’s sextet that included John Coltrane on tenor sax, Julian “Cannonball” Adderley on alto sax, pianist Bill Evans, Paul Chambers on bass and drummer Jimmy Cobb, Kind Of Blue was an early excursion by Davis into modal improvisation, which allowed a player to improvise on a series of scales rather than the more constricted chord progressions of bebop. The modal style, first developed by jazz composer George Russell in the early ’50s, emphasized soaring melody over bop’s often frenetic rhythmic creations.

After leaving Davis’ group, Coltrane would take the modal concept to new heights on his signature 1964 album A Love Supreme. Disc one of Kind Of Blue (the best-selling jazz album of all time, incidentally) features the original work with alternate takes and false starts added; disc two presents session tracks that didn’t make the cut (“On Green Dolphin Street,” “Fran Dance”); and the DVD spotlights a pair of documentaries, one on Davis’ career and the other on the making of the album.

“Blue In Green” from Kind Of Blue: