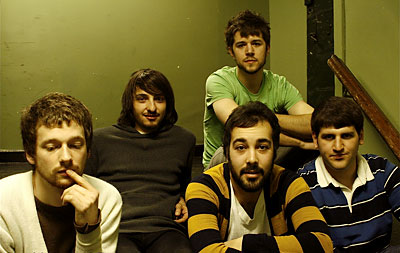 Redwalls guitarist Andrew Langer has left the Chicago band he co-founded and formed a new quintet dubbed the Sleeptalkers (pictured). “The Redwalls was our childhood dream,” Langer says of the heavily Beatles-y outfit of friends from Deerfield, Ill. “It was a fun and exciting experience for a while, but as my musical taste grew outside of that bubble, it became apparent that I wanted to move in a different direction.” Langer picked Robert Pollard’s main collaborator, Todd Tobias, to produce and play bass on the Sleeptalkers’ first record, currently untitled and label-less. Langer is hoping for an early-2009 release. Continuing on the Pollard-connection front (we are MAGNET, after all), the Sleeptalkers’ first gig, February 7 at Schuba’s in Chicago, will be opened by Regal Standard, Pollard sideman Jason Narducy’s new band. No word on what the remaining Redwalls are up to, or whether Chris Slusarenko is involved in any way.

ANDREW, THAT IS GREAT NEWS TO THE MUSIC WORLD !. I AM ONE OF YOUR BIGGEST FANS (235 LBS). SERIOUSLY, I HAVE FOLLOWED YOUR CAREER FROM IT’S INCEPTION AND HAVE APPRECIATED KNOWING YOUR GIFTED TALENT IN VOICE, WRITING, FEELING AND INSTRUMENTAL (INCLUDING LEAD GUITAR). AWESOME TALENT, AWESOME PERSON !!!!
YOU ROCK ……………………………

Can’t wait for the new album! Saw the Redwalls in Paris while on vacation in October – great show, and evidently one of Andrew’s last with the band…glad to see he’s back on the horse!