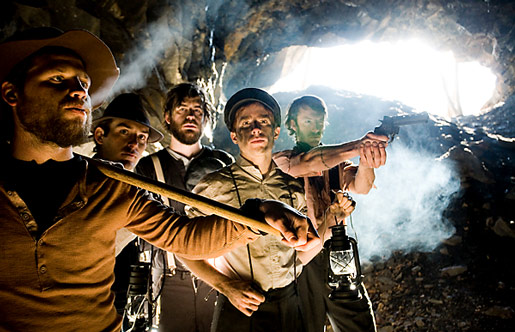 It’s tough to envision Dr. Dog recording an album in the middle of a Philadelphia winter. The sand-between-your-toes vocal harmonies, psychedelic sunshine, sudsy ’60s pop and string-popping live sets—even at the band’s darkest, it doesn’t make much sense. But when the West Philly-based five-piece took a break from touring to dive back into the studio in early 2008, the jams came anyway.

“The Breeze” from Fate:

“It didn’t feel like we were making weird music for January,” says singer/guitarist Scott McMicken. “My notion of what our music is and where it fits in my head and life is different because I know where it all comes from. In some cases, the event of writing the song and the sound of its final recording are in stark contrast. I have a sense of its wintry qualities as well as its summery qualities. In the end, it’s a song.”

Fate (Park The Van), Dr. Dog’s fifth full-length, isn’t only its most fully realized; it’s also the closest you can get to capturing the train-jumping rush of a live show on magnetic tape. In addition to furthering the gussied-up production of 2007’s We All Belong (a clear departure from the decidedly lo-fi crackle of the band’s earlier work), the goal was to bring all the stage-shaking and bleeding landscapes of touring into the studio.

“For the first time, my expectation of what I wanted to hear coming out of the speakers had so much more to do with the things I’d seen and experienced onstage,” says McMicken. “[The recording of Fate] was a little overwhelming. I was feeling like I was onstage, that I had to turn the headphones up really loud, that I had to get my chest into it.”

Although Dr. Dog hears its share of griping fans wishing the band members would invent new sounds rather than hug as tightly to the classic ones that they—and even their harshest critics—most certainly do, spontaneity and predictability seem to come together on Fate in oxymoronic harmony. Obvious influences (Beatles, Band, Beach Boys) still abound, but bluesy rock burners such as “The Ark” and bustling piano-pop numbers such as “The Rabbit, The Bat And Reindeer” are solid evidence of progress.

“I think we got as close as we could get to blurring the lines between our feelings about music, making music and what it feels like to be alive,” says McMicken. “It made me a better person, and it made us a better band.”