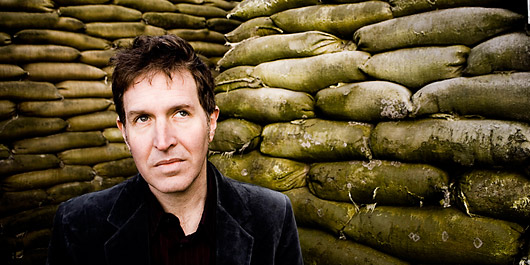 Erstwhile Miracle 3 frontman Steve Wynn is a first-ballot MAGNET hall of famer: Check out our 2001 interview of Wynn conducted by acclaimed novelist George Pelecanos (who went on to be a writer/producer for HBO series The Wire). Wynn—who helmed seminal Paisley Underground band the Dream Syndicate—teamed up last year with Minus 5/Young Fresh Fellows mastermind Scott McCaughey (along with Peter Buck and Wynn’s wife, drummer Linda Pitmon) to create the Baseball Project, whose Volume 1: Frozen Ropes And Dying Quails was a stellar homage to the national pastime and quickly became a staple around the office. Given our affection for all things Wynn, we got in touch with the prolific singer/songwriter to update us on his activities for 2009, which, thankfully, include another Baseball Project record. In addition to Up There: Home Recordings 2000-2007, a mail-order compilation of demos and other rarities that will be available later this year, here’s what Wynn (“I’m still behind Robert Pollard’s pace, but I’m only on my second cup of coffee this morning”) has going.

“Bring The Magic” from Steve Wynn And The Dragon Bridge Orchestra’s Live In Brussels:

Steve Wynn And The Dragon Bridge Orchestra, Live In Brussels: a two-CD/DVD set recorded at Belgium’s Ancienne Belgique in October promoting 2008’s Crossing Dragon Bridge. “We had our little junior orchestra with violin and upright bass, as well as Chris Cacavas on keys, Chris Eckman on guitar and Linda on drums. It’s a great keepsake from a tour that was different than any I’d done before: big, vibrant, exciting and even, uh, grown-up in all the best ways.”

Steve Wynn & The Miracle 3, TBD: “We’ll be doing our first new record in four years sometime this summer. There’s not much to say beyond that, but it’s a crime that I’ve been keeping the best band I’ve ever had out of the studio for this long.”

The Baseball Project, Volume 2: “Scott and I are already writing songs. How many people have played the game in 150 years? In other words, there’s no shortage of subject matter. We might even do a few shows this year, which would be great, as our only two performances in our brief history have been a party the night before Linda and I got married and The Late Show With David Letterman. Maybe we shouldn’t play another show, as that’s an interesting live history.”