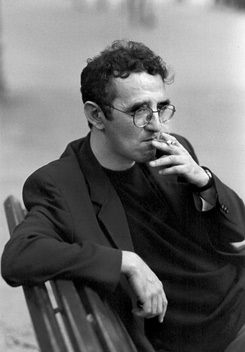 Newman: Roberto Bolaño died in 2003, but he’s become quite a hot author in the past couple years. Last year, his book from 1999, The Savage Detectives, was translated and published. His final book is a 900-page opus called 2666, and I’m about two-thirds of the way through it. In the worlds he creates, it seems that art and murder are often tied up together. It’s hard to describe, but his writing is dark and very beautifully written. He’s Chilean but spent most of his life in Mexico. I’ve been drawn to Latin-American writers recently; I don’t know why. A lot of people give Latin America credit for magical realism—Gabriel García Márquez being the most popular example—so that’s a somewhat common element of it, but Bolaño doesn’t really work in there. I can’t really tell you what links Latin American writers. It’s like when I was into R.E.M. as a teenager. I tried to find music like theirs by listening to the other bands from Athens, Ga. I found out Bolaño was a huge fan of Julio Cortázar, so I read him and that leads to other people like Carlos Fuentes, which leads to Juan Rulfo which leads to José Donoso and so on.

The New Yorker profiled Bolaño in 2007; read it here.