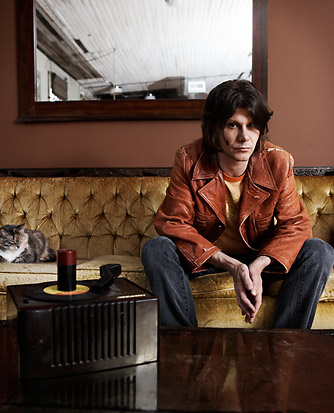 Safe In Sound, Jim Boggia’s 2005 sophomore album, found the fortysomething West Philly musician juggling jangly power pop and solemn singer/songwriter fare buoyed by his frazzled, soul-kissed tenor. With its tight hooks, fat production and guest spots from Aimee Mann and the MC5’s Wayne Kramer, the LP was championed by fans and critics alike. Yet, to this day, Safe In Sound leaves Boggia cold.

“To And Fro” from Safe In Sound:

“Eighty-five percent of the way into making the record, I was very pleased with it,” he says. “Then a deadline was imposed, and the ending of it was rushed. It actually turned out more polished than it would have if I’d had more time.”

How ironic, then, that BlackBerry would use the intro to one of Sound’s best tracks, “Live The Proof,” for a recent TV ad. Boggia is much more comfortable talking about the new Misadventures In Stereo (bluhammock music), an organic, somewhat subdued follow-up whose mix-and-match feel, baroque-pop leanings and darker emotional shades take some getting used to. Boggia has always been candid about the host of difficulties that have colored his battered self-image: an isolated upbringing in Flint, Mich., a difficult family life that ended in his parents’ divorce, one failed marriage of his own and the partial blindness that makes traveling difficult. In person and on record, he’s largely taken those hard knocks in stride, relying on humor and nostalgia to elevate his mood.

On Misadventures In Stereo, though, Boggia often sounds despondent. “Nothing’s Changed,” the album’s achingly tuneful centerpiece, displays all the optimism of a well-crafted suicide note and helps set the tone for a collection of defeatist gems occasionally leavened by forays into low-fidelity reminiscing (“8Track,” “Listening To NRBQ”). Even for the unlikely hero in “Chalk One Up For Albert’s Side,” which Boggia co-wrote with legendary Beach Boys collaborator Tony Asher, victory is hardly sweet.

“I almost called this album One Win, Nine Losses,” chuckles Boggia, whose latest tussle with misfortune is documented in the song “To And Fro,” an edgy reflection on the volatility of commitment that echoes early Elvis Costello. “If it don’t feel right, the door’s open wide,” sings Boggia. Apparently, his longtime live-in girlfriend took him up on that offer, moving to New York City in early ‘08 to sample life on her own.