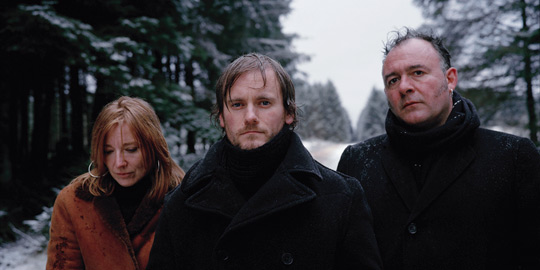 PORTISHEAD Third [Mercury]
The Bristol, England, band’s creepiest, most misanthropic work in a career marked by elegant-yet-disturbing misanthropy. A totally welcome return to the fold, and return to form.

SANTIGOLD Santogold [Downtown/Lizard King]
After seeing Santi White kill at SXSW with Diplo on the decks, the question was how her Missing-Persons-meets-the-Supremes act would translate in the studio. The nasty remix of “You’ll Find A Way” was definitely the droids I was looking for.

THE BUG London Zoo [Ninja Tune]
In which artist/producer Kevin Martin unleashes the angry, digitized sound of today’s Young London on the unsuspecting dance floors of the world. A cavalcade of MCs pit their skills against his beats; while it makes for an entertaining series of tilts, ultimately it’s the Bug’s no-nonsense, mow-‘em-down approach that wins the day.

HERCULES AND LOVE AFFAIR Hercules And Love Affair [DFA]
Lush, sad house music (yes, this was once a mathematically possible combination) with Antony (of “And the Johnsons” fame) periodically rocking the mic.

THE KNUX Remind Me In 3 Days… [Interscope]
Two brothers displaced by Katrina somehow craft the party-up album of the year. The return of conscious hip hop, part one.

GIRL TALK Feed The Animals [Illegal Art]
So what if you’ve heard the hundreds of microsamples (from Jay-Z to Jackson 5, with some Butthole Surfers thrown in for good measure) that make up this album? Gregg Gillis assembles them in a completely new/fresh way that ultimately redefines what sampling means in the ‘00s.

Q-TIP The Renaissance [Universal Motown]
Nearly nine years after his post-Tribe solo debut, the former Jonathan Davis comes correct with a jazzy, improv-heavy disc that never saw the light of day on radio but turned heads with its fiercely original blend of beats and rhymes. The return of conscious hip hop, part two.

THE TING TINGS We Started Nothing [Columbia/Red Ink]
Essentially a maxi-single meant to spotlight two tracks: “That’s Not My Name” and “Shut Up And Let Me Go.” In 2008, those two killer tracks will land you in the eight-slot.

ROBYN Robyn [Cherrytree/Interscope]
Europop with all the bright lights switched on—way on. “Konichiwa Bitches” may very well have been the single greatest dance cut of 2008.

DIZZEE RASCAL Maths + English [XL/Definitive Jux]
“Brit-hop” hasn’t exactly peeled its caps back over the past couple of decades, but Dylan Mills shows everyone what time it is with his mushmouth blend of Cockney slang and ragamuffin dancehall energy. The most underrated release by a former buzz artist (and Mercury Prize winner) last year.

NIce list Corey! Would the Flying Lotus count as an “break/beats electronic dance” album? I would’ve included that one.

I would be remiss if I didn’t note that Gang of Four’s Dave Allen had directed me to Burial’s “Untrue” — technically a 2007 release in the UK but which came out in 2008 Stateside (an amazingly sublime dubstep “pocket symphony,” as Dave described it in a Tweet to me — he can be reached @Pampelmoose on Twitter). I should also note the mysterious Portland-based lap-hop musician Podington, whose insanely ambitious ten-disc (!!!) release “The Podington Bear Box” also intermittently made an impression on my cerebral cortex from time to time in ’08.