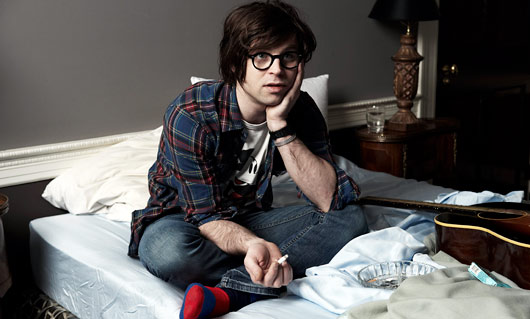 January 16 was as busy a day in the life of Ryan Adams as ever. For a man who supposedly has a stockpile of hundreds of unreleased songs tucked away in his archive for a rainy day (god knows whether they’re any good, but that’s beside the point), “work rate” has never been an issue with Ryan Adams. It’s more a matter of direction for the Kid, and since voluntarily kicking his heroin/cocaine cocktail habit back in 2007, he’s appeared to be on what passes in Ryan Adams’ world as a socially acceptable, productive course of activity: He assembled the Cardinals, a terrific (and more importantly, stable) backing band, released several mediocre albums with occasional flashes of old brilliance and even announced plans for his first work of “soul poetry,” Infinity Blues (to be released later this year). But on that fateful Friday, our boy Ryan Adams got bizzay, but in a manner more befitting his old, substance-tainted lifestyle, telling the world in no particular order via his blog:

Ryan Adams isn’t blogging anymore. This must’ve been a classic example of the Kid engaging in a wee bit of late-night “drunk posting,” as he since took it all down and replaced it with fresh hippie-indebted material such as, “I love people. Everybody. I love them, I think, as a stamp collector loves his collection… I have to live my life, and it is the only one I’ll ever have.” But then he took all that down, too.

The final date of Ryan Adams’ current tour with the Cardinals (March 20 at Atlanta’s Fox Theater) will be his “last venture” with the group: “Maybe we will play again sometime and maybe I will work my way back into some kind of music situation, but this is the time for me to step back now and reel it in and I wish everyone peace and happiness.” (With a pocketful of MDMA in his flared, baggy trousers, we’re thinking Ryan Adams may yet bring back the whole Madchester scene before it’s all said and done.)

Ryan Adams’ health is evidently a major culprit in his decision to end all things musical: “I lost more than anyone will ever know (hearing, someone I loved, my sense of dignity, a never-ending losing battle with stage fright and now my hearing and balance due to an inner ear issue).” (Thus replacing Ryan Adams’ old health standby, dental problems, as his new rebel-without-cause du jour.) Ryan Adams also goes on to post a lengthy, almost WebMD-like public-service entry about Ménière’s disease, an inner-ear disorder that can affect hearing and balance and is typically characterized by episodes of dizziness and tinnitus. (Which means that in all probability, Ryan Adams simply confused his pre-cleanup existence with the symptoms of his post-cleanup existence. Like, totally weird, dude.)

Ryan Adams believes he will always be “viewed as an asshole,” but is not actually an asshole. At least, according to Ryan Adams. Who should know, right?

But Ryan Adams is all in favor of the scribe’s life: “I LOVE writing…yay!” So much so that he’s got two more books planned beyond Infinity Blues. (Booksellers of the world: David Foster Wallace replacement alert; consider yourself warned.)

Once upon a time, MAGNET published a piece I wrote about Ryan Adams titled “Saving Private Ryan,” in which the Kid originally agreed to participate, then eventually backed out altogether. (Fortunately for us, more than a dozen of Ryan Adams’ former associates decided to participate, and basically wrote the story for me, which was quite nice of them, upon reflection). This led to a subsequent falling out with then-ascendant Ryan Adams, who blackballed MAGNET from any further contact, thus resulting in a follow-up piece I wrote, “Don’t Believe The Hype,” which explored Ryan Adams’ subsequent trajectory in the music biz and the sheer Herculean effort his publicity people put into making sure that Ryan Adams’ various flaws were camouflaged, lest the music-buying public be shocked into reality by Ryan Adams’ occasionally bratty and substance-fueled inconsistent behavior, more likely to be exposed by publications like MAGNET, which were more likely to overlook Ryan Adams’ various Jesus-like qualities in favor of less-appealing personal attributes. (Sample quote from Ryan Adams’ publicists: “The article MAGNET published was spiteful, disrespectful and out of line. Ryan won’t be doing anything with the publication again. Thanks.” Good times, yo.)

So taken in sum, one has to view Ryan Adams’ latest tête-à-tête with the music industry (or with himself? Or both? Discuss) with a pinch of salt, as it appears to be yet another effort by Ryan Adams to play the industry for all it’s worth by using his god-given right to post endless pixels about himself as a way to bait hapless publications into writing about … Ryan Adams. Oh, goodness, have we ever been hoodwinked. You got us, Ryan Adams, damn you anyway! You win again!

uhmmm, mostly mediocre with occasional flashes of old brilliance? give me a break, captain opinion! his stuff has never been anything less than fucking genius american folk writing, as good at it’s worst as anything ever released by anyone. sycophantic? maybe, yes. but with good reason!

You’re a complete douche bag. And it’s obvious that Ryan Adams has hurt your feelings. Why don’t you forgive and forget, and quit writing articles in an attempt to belittle him and regain your self-esteem. Again, douche bag.

Dear Ryan (er, “Jacob”) — thank you for the constructive and super-thoughtful criticism/armchair psychiatry session, as ever (I guess this means we’re talking now, right?). You should probably start posting under your given name, though. You know: “Douche bag?” That’s the one.

Usually when you interview someone and they act like an ass, you write about him as an ass. Just gut reaction. Mostly mediocre with flashes of brilliance is exactly correct. You think playing steel drums is ever acceptable in alt rock, then I guess he is brilliant. Go listen to your dreadful OAR and let a rock critic write about rock music objectively.

as soon as you start trying to delimit what instruments can be allowed into the creative moment you become a lifeless and energy sucking critic whore douche bag with nothing meaningful to say about anything except your own opinion.

(And ryan, if that is you writing as ‘Jacob’, and if it’s true that you’re not going to play with the Cardinals anymore, I’d love a shot at being in your band…)

cheers and peace and yeah, try to get over your little crybaby hurt feelings mr. critic and write something objective.

Awww, looks like Ryan Adams hurt someone’s feelings! I’d feel bad for you, but while you’re calling him an asshole you’re also devoting a whole article to being one. What you wrote was a waste of words, and I can’t even believe I’m typing a response to a douchebag like yourself. Atleast you can be known for something though, right?