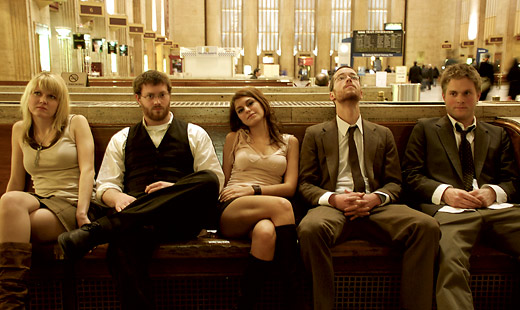 On paper, East Hundred appears to be a prime candidate for Metallica-style band therapy sessions. The Philadelphia quintet contains brothers (guitarist Brooke and drummer Will Blair) as well as ex-lovers (Brooke and singer Beril Guceri), and its new full-length debut, Passenger, is a break-up album whose lyrics all but declare, “We shan’t work together again.” Consider, for example, Beril’s words on album track “Pony”: “Our love is the perfect shade of blue/If you’re heading out/Don’t think I’m coming with you.” The underlying sentiment of Passenger may be part Fleetwood Mac’s cut-and-run Rumours, part Marvin Gaye’s more reflective Here, My Dear, but the members of East Hundred insist their tangled personal relationships are a benefit.

“Plus Minus” from Passenger:

“It can be hard, frustrating, sad and trying at times being in a band together with my ex-girlfriend, but it’s all worth the tough times, because we believe in it so much,” says Brooke. “Some of that tension has pushed us to face our feelings head on, and to do something truly honest with it, and it’s a release. We basically dealt with our break-up in a very open way through our music.”

Meanwhile, the Blairs, who grew up outside D.C., haven’t lived up to the embattled-sibling stereotype of the Davies or Gallaghers. “As clichéd as it sounds, there really is an unspoken connection, within our goals and music, that I think you only see with brothers,” says Will, the younger brother and East Hundred’s de facto manager and organizer. “I don’t think we would operate well in different bands without each other.”

This well-adjusted group came together as a trio of Will, Brooke and Beril in 2004 (while the latter two were still dating), four-tracking in the Blairs’ basement and playing shows that became nerve-wracked performances for the stage-shy Beril. “Never having sung in public before is probably why I had anxiety,” says the Chicago native, who moved to Philadelphia to study film at Drexel University. “But then again I’ve managed anxiety my whole life, so that just intensified it. Brooke and Will were always really supportive and I can’t imagine having opened up like that creatively and emotionally with anyone else.”

Bassist Dave Sunderland and keyboardist Susan Gager joined by the time the recording of Passenger began at Drexel’s Mad Dragon studios in 2007. (The college runs a music-business program and record label; East Hundred is unaffiliated with them.) It was during the recording session that Beril and Brooke split, giving rise to a different-sounding version of the band. “There was always something to write about, but obviously the break-up gave us more material,” says Beril. “For the first time I was alone while being in a band making music. That definitely fueled more lyrical expression.”

The band resumed recording Passenger with Brian McTear (Mazarin, Matt Pond PA), and the result is a group of songs that roam between the dream-pop jangle of the Sundays and the sharper punk edges of Rainer Maria. Passenger doesn’t sound much like currently en vogue indie rock; the album’s refusal to bury hooks or play coy with Beril’s front-and-center lead vocals gives East Hundred the refreshing, confident air of a radio-ready pop band. That Beril is easy on the eyes—certainly as lovely as Hope Sandoval—doesn’t hurt the band’s odds of East Hundred making a name for itself outside the traditionally unfamous Philly scene.

“We have a love/hate thing with Philly, buts it’s more of a ‘love/frustration’ thing, actually,” says Will. “It really does feel like home, and it allows us a lot of freedom to attain our goals, but it hasn’t necessarily made it easy. I think there are so many awesome, talented bands in Philly, which keep us working harder, but honestly it feels like we rarely fit into a specific scene. We do feel a bit alienated at times. We’ve heard people say, ‘You guys would do so well in L.A.,’ but I just don’t see us ever making that move.”