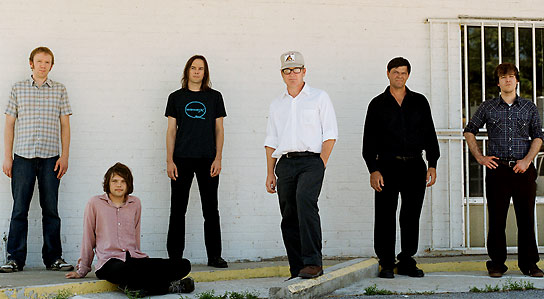 “I’m havin’ such a good time,” said Kurt Wagner, shortly into Lambchop’s 90-minute set at Ohio State University’s Wexner Center For The Arts, “I don’t wanna fuck it up.”

Wagner made the sheepish crack as much to break the silence as anything, since the initial atmosphere inside the Wexner’s black-box performance space was all about the gravity of High Art. The Center’s current exhibit was a collection of seminal Andy Warhol films and audio recordings, and the film theater was running a lauded documentary on venerable sculptor Louise Bourgeois through the weekend. So by the time Lambchop’s audience of fewer than 100 people made its way through the maze of hallways into the black box, we’d been shushed into the quiet respect that comes with wandering through spaces where you have to check your coats, cameras and pens at the door.

But the intimacy of the Wexner’s performance space, a foot-high stage with long tables radiating out damn near from the very edge (“It looks like a seminar in here,” Wagner joked), soon helped break the ice. Which was fitting, since an unexpected afternoon storm had blanketed the campus with a heavy, wet layer of snow. From the green room to the left of the stage, Lambchop walked out onto the floor about 20 feet from the audience and, without fanfare or even much of a sense of arrival, took up positions and began to play.

Once billed as “Nashville’s most fucked-up country band” in its early promotional materials, Lambchop has evolved from its fractured countrypolitan roots into a band of remarkable range and subtlety. The group’s 17-song set at Wexner was heavy on material from 2008’s OH (ohio), a gently wistful collection whose Latin-inflected title track served, appropriately enough, as the evening’s opening number. But a handful of songs reached back as far as 1994 debut I Hope You’re Sitting Down (including acid-head death ballad “Soaky In The Pooper”) and 2000’s Nixon (earnest Stax-soul number “What Else Could It Be?”). Wagner, playing his first show in the state of Ohio in seven years, made a frequent point of highlighting the band’s long time away: “Here’s one you might not know,” he said cheekily, before the group went into the closest thing to a hit Lambchop has ever recorded: the soaring “Up With People,” remixed and anthologized on several releases since its original appearance on Nixon.

The current touring lineup of Lambchop is a tight sextet with a surprisingly full sound, most of it the result of layering guitar and keyboard effects. But watching the musicians run down the set list, what impressed most was their ability to create a lush dynamic from organic sources, such as Wagner repeating his vocal lines after backing away from the microphone, simulating a delay effect on barn-burning set closer “Give It,” and the crisp sound of three guitarists fingerpicking different patterns at once on multiple songs.

And there wasn’t much to get in the way of that sound. The audience was parked right at the edge of the stage, and Lambchop has never been a band that cared much about between-song patter or rock ’n’ roller stage presence. Everyone in this incarnation, in fact, looks either like your dissipated uncle who plays lap steel at the American Legion Hall on Wednesdays or your hipster cousin with six pairs of Vans under the bed in his off-campus apartment. But of music, and of endearingly goofy personality, there was a great deal. Midway through the show came a nightly segment in which guitarist/keyboardist Ryan Norris eats a snack prepared before the show by pianist Tony Crow and pronounces it either “sweet” or “savory.” (This evening’s repast was a celery stick covered in chocolate and a few shakes of cracked black pepper. “By and large, sweet,” pronounced Norris. Epicures take note.) Crow’s endearingly awful pirate jokes bracketed OH (ohio)’s “National Talk Like A Pirate Day,” and Wagner gave a heartfelt thanks to the Buckeye crowd for helping to “elect a new president … From what I hear, even if you didn’t vote for him, you’re not too pissed off yet, so thanks.”

At the end of the evening, Wagner said, “All seminars must come to an end. So thanks for coming out.” By the show’s close, the crowd and the band had gotten comfortable enough with each other that both intermingled at the edge of the stage, speaking in low, warm voices while the snow whirled outside. “I’ve been waiting to see you guys for 10 years,” said one grinning audience member, shaking hands with Wagner and beaming. “Thanks for coming.” Wagner thanked him back, smiling just as broadly.