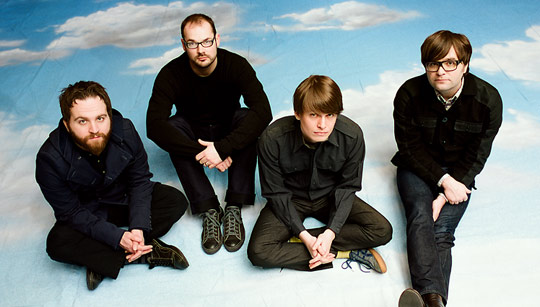 Legendary singer/songwriter Leonard Cohen will play his first U.S. show since 1993 on February 19 at New York City’s Beacon Theatre. Given this rare occurrence, the show is sold out, but Ticketmaster benevolently invites you to pay through the nose through one of its scalper partners. Cohen is also slated to play the Coachella festival in April … Another singer/songwriter, Miranda Lee Richards, will release her new album, Light Of X, February 10 on Nettwerk. The LP was produced by Rick Parker (Black Rebel Motorcycle Club, Von Bondies) … In more singer/songwriter news, Justin Townes Earle’s second record, Midnight At The Movies, is out March 3 on Bloodshot. A four-month U.S. tour begins February 21 in Indianapolis … Just in case you were wondering what another singer/songwriter might be up to, Madeleine Peyroux’s spring tour begins March 6 in Albany, N.Y. Peyroux is donating $1 from each ticket sold on this jaunt to local charities through the National Coalition Against Domestic Violence … Americana heavyweights Dave Alvin, Calexico, Alejandro Escovedo, Los Lobos and others pay tribute to a fallen compadre with A Man Of Somebody’s Dreams: A Tribute To The Songs Of Chris Gaffney, out March 31 on Yep Roc. Gaffney passed away in 2008 after battling liver cancer … Speaking of Yep Roc, X’s John Doe is teaming with the Sadies for the label’s Country Club, an album of country covers due April 14. In addition to songs by Merle Haggard, Waylon Jennings and Roger Miller, the set includes three Sadies originals and a new tune from Doe and X partner Exene Cervenka … Grammy-nominated Death Cab For Cutie (pictured) announced a spring tour that will kick off March 7 in Miami and conclude May 6 in Atlanta. Support acts will be Cold War Kids, Matt Costa and Ra Ra Riot. Check local listings for which openers play in your city … My Morning Jacket has issued Live From Las Vegas, an iTunes-exclusive EP. The six songs are taken from a gig at the famous Palms Hotel And Casino and include the previously unreleased “Dear Wife” … Radiohead completists, mark March 24 on your calendars: Capitol/EMI is re-releasing the band’s first three studio efforts—1993’s Pablo Honey, 1995’s The Bends and 1997’s OK Computer—with plenty of extras. The “collectors edition” versions each feature a second disc of rarities, demos and live recordings, while the limited-edition “special collectors edition” packages also toss in a DVD and postcards … The intricate Seattle indie rockers in Minus The Bear take it down a notch with Acoustics (Suicide Squeeze), a seven-track acoustic (duh) EP of newly recorded versions of fan favorites, available February 17. Originally released last year as a tour-only CD, Acoustics is now a 5,000-copy, vinyl-only proposition, on baby-blue/crème wax for those of you who find that important.

Nick Cave And The Bad Seeds’ “Tower Of Song” from 1991’s I’m Your Fan: The Songs Of Leonard Cohen By…:
https://magnetmagazine.com/audio/TowerOfSong.mp3