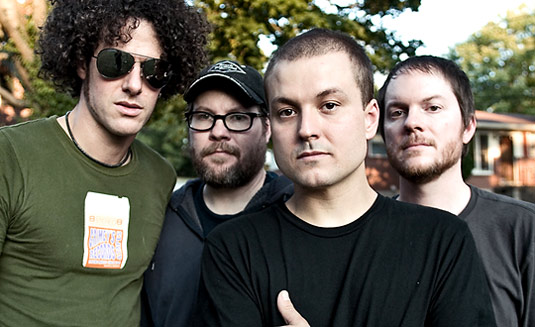 When Superdrag frontman John Davis put the then-final incarnation of the band on hiatus in 2003, it certainly seemed permanent. Davis had recently undergone a religious transformation and was prepping his 2005 self-titled Christian-rock debut. (Don’t be fooled by that lazy description; while it might take some getting used to the lyrical theology, the record is nothing like the rest of the genre. And the follow-up, 2007’s overlooked, harder-rocking Arigato!, is even better.) “I have a totally different kind of heart about things and a different way of looking at things,” Davis said in a 2005 interview with MAGNET. “I felt like a phony getting up and singing some of the stuff … I didn’t feel like I was being honest. When that realization hit me, I didn’t feel like I could go on.”

So it came as a blessed surprise when news began filtering out that the original Superdrag lineup—Davis, drummer Don Coffey Jr., guitarist Brandon Fisher and bassist Tom Pappas—would be reuniting for a set of shows in 2007 and 2008. While it may have been tempting to view this as yet another defunct group hopping on the reunion-tour cash-grab express, the passionate concerts—both revelatory and celebratory—cast aside any such aspersions. And it gets better: The reconstituted Superdrag is releasing Industry Giants on March 17, the original lineup’s first LP since 1998’s Head Trip In Every Key, regarded in some circles as the band’s pinnacle. (We’re partial to 2000’s moving In The Valley Of Dying Stars; Pappas departed prior to its recording.) The boys are also playing another round of gigs that have a lot to live up to.

Davis sat down to answer a few questions about Superdrag’s rebirth. Davis will be the guest editor of magnetmagazine.com all this week. Check back for his daily posts on favorite music, film, food and more.

“Everything’ll Be Made Right” from Industry Giants:

When we spoke in 2005, you didn’t discount the possibility of Superdrag rising from the ashes, but it didn’t seem likely. What happened that led first to the reunion tour and then the idea to make a record with the original lineup?
A number of things, I guess. First of all, when I got ready to write music for Arigato!, I wound up writing a bunch of songs that sounded like Superdrag. When the Arena Rock Recording Company put its rarities and b-sides record out (2007’s Changin’ Tires On The Road To Ruin), that probably brought the band back to the forefront of our minds in a way that maybe it hadn’t been in quite a while. Once we decided to get together in the same room and play the music again, everything else fell into place really quickly and easily. I had half of [Industry Giants] written before we had decided to do anything.

The reunion tour was amazing to witness. What was it like from the band’s perspective?
I think I can speak for everybody when I say we were very thankful to be there and have the opportunity to do the shows. To have the band still matter to people—maybe more than it ever did—and to see the fans’ reaction to the whole thing was really touching. And we got to work in some of the best possible places. That in itself is a gift not to be taken for granted.

How easy or difficult was it to write new Superdrag material that would satisfy the band in addition to staying true to your faith?
It wasn’t difficult at all. I just opened my heart and mind and wrote, like I always do. To do it any other way would’ve been dishonest.

You’ve said this is the best Superdrag record. Explain how this is possible, considering you created In The Valley Of Dying Stars.
I said it might be. [Laughs] Ultimately, you’ll have to decide. From a certain point of view, if it’s not our best album after this long, then what’s the point? Everybody wants to think their latest work is also their best work. I think this might be the most focused the songwriting’s ever been. Brandon and Tom both contributed songs to the album for the first time, so that makes it interesting in a new way.

In addition to the tour, what’s next for the band?
It’s hard to look too far ahead into the future … but as long as the music still sounds good and it means something to people, I intend to keep it coming.

[…] MAGNET has an interview with Superdrag’s John Davis […]

I’m also with Magnet on that one: In The Valley of Dying Stars is an overlooked masterpiece of power pop.

Superdrag are probably my favorite band ever. As well as my single biggest self-confessed music-geek influence…I actually shed a tear listening to this one.

Thanks for putting some life back into my cold dead heart boys.

I’m partial to Head Trip, meself, but then every Davis-penned project is lovely in its own way. Can’t wait for the latest.

truly one of the great underrated bands in my library and heart. I saw them a few times in the 90’s, got to speak with Davis for an interview, he was at some bar, he didn’t know where, on the road and it was a great talk. They’re incredible live and I’m getting misty in hopes of them coming to L.A. Looking forward to that and new album. Won’t miss them this time around.

“True Believer” is the best John Davis I’ve heard yet but I never got over the My Bloody Valentine flavor of “Regretfully Yours” … damn good record (they’re all pretty damn fine). Got my fingers crossed that you’ll come down to Texas.

[…] a recent Magnet Magazine interview, John said of the new album that “this might be the most focused the […]