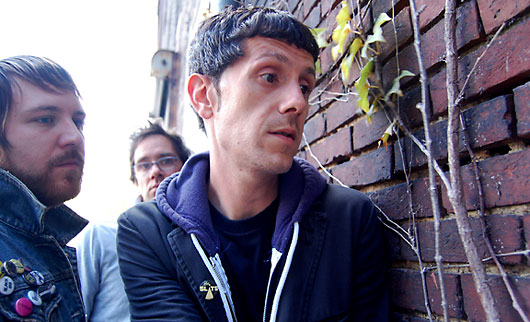 The Oranges Band Are Invisible is the latest release from the Oranges Band, which makes sense: We were wondering what happened to these guys. You know them: Led by singer/guitarist Roman Kuebler, who served as the bassist in Girls Can Tell-era Spoon. From Baltimore, ably repping the town before all that Wham City garbage, when all that was there was the Ottobar, Oxes, Lungfish and the National Aquarium. Signed to the Lookout! label, which all but folded not long after the release of the Oranges Band’s excellent 2005 album, The World & Everything In It. The Oranges Band began recording Invisible more than a year ago (check out the studio blog at Popmatters) and finally self-released the album in November without much in the way of promotion. The group’s catchy post-punk riffing remains, but it’s now in the hands of the newest member of the Oranges, ex-Guided By Voices/Cobra Verde guitarist Doug Gillard. In addition, frontman Kuebler has started a song-of-the-month club for his solo material (under the name Romania). For a dollar a month, you can download his songs at Every7th.com.

“Gordon’s Nightclub” from The Oranges Band Are Invisible: