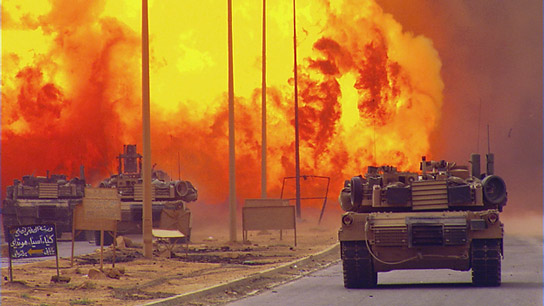 Davis: Charles Ferguson’s 2007 documentary No End In Sight trawls the depths of the incompetence, arrogance and ignorance that characterized the Bush administration’s policy and decision-making in post-invasion Iraq. It consists mainly of interviews conducted with occupation authorities from the Office for Reconstruction and Humanitarian Assistance (ORHA) and the Coalition Provisional Authority (CPA). With troop levels woefully insufficient for the task at hand, the Oil Ministry was well-protected while dozens of other crucial government buildings and Iraq’s national libraries and museums (containing artifacts from some of the earliest forms of human civilization) were looted and destroyed, sending a clear message to Iraqi citizens that U.S. forces had never really intended to preserve law and order in a post-“Shock And Awe,” post-“Mission Accomplished” Iraq.

The “De-Ba’athification” of the existing Iraqi government infrastructure hastened the descent into chaos. The disbanding of the Iraqi military, leaving 500,000 young men unemployed and desperate, threw gasoline on the fires of the insurgency. Some of the ex-soldiers then took possession of massive stockpiles of arms the U.S. hadn’t bothered protecting. Perhaps the Village Voice’s Rob Nelson put it best: “Charles Ferguson’s No End In Sight turns the well-known details of our monstrously bungled Iraq war into an enraging, apocalyptic litany of fuck-ups.”