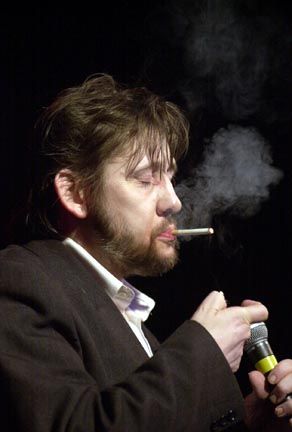 Continuing his “retirement” from music, alt-country crybaby Ryan Adams is celebrating Valentine’s Day with Extra Cheese, a seven-track EP available February 10 on iTunes. Your $3.99 gets you Rye Bread’s “best” love songs, and that’s all we’re gonna say about it … Eclectic singer/songwriter Tim Fite, who gave fans two free download-only LPs for Halloween, pulls a Ryan Adams and offers Change Of Heart on February 14. The gratis download will be found at www.timfite.com … The new Super Furry Animals’ LP will see its own digital release March 16 at www.superfurry.com. The follow-up to 2007’s Hey Venus currently has no title but does have a label, Rough Trade, and an official release date of April 21 … Former V-Roy and current leader of the Commonwealth Scott Miller’s next long-player, For Crying Out Loud, is out April 14 on his own F.A.Y. Records. The disc features the Commonwealth playing to guitar-and-vocal demos Miller previously self-issued online called, appropriately enough, Appalachian Refugee Demos … Alt-dance-floor divas Franz Ferdinand launch a 19-date North American tour April 13 in Seattle. The stylish Scottish quartet recently performed on The Tonight Show and The Late Late Show … In more Euro-band tour news, London’s the Kills begin a 22-gig U.S. trek April 19 at the cozy Coachella Arts And Music Festival. Black Balloon (Domino), the Kills‘ new EP, will be out April 14 … Grunge-era trio the Presidents Of The United States Of America take advantage of a new administration by releasing three iTunes-exclusive EPs: Rot In The Sun (out now), Ladybug (also out now) and Bad Times (out March 24). Each EP includes a title song from These Are Good Times People, the band’s 2008 LP, augmented with a b-side and a video … Soundgarden/Audioslave screamer Chris Cornell releases his third solo effort, the oddly titled Scream, March 10 on Interscope. Cornell employed Timbaland as producer for what’s being called a “brave new world of cross-genre collaboration” … That description makes us want a drink, but dipsomaniacal Pogues leader Shane MacGowan (pictured) never needs an excuse. Still, he’ll get the chance starting March 7, as his band kicks off a 10-date tour at Miami’s Langerado Festival … And finally, we just have to let you know that our favorite arch-conservative, batshit-crazy, hard-rock guitarist Ted Nugent has been inducted into the National Bowhunters Hall Of Fame. No word on whether he’s ever tested positive for ’roids, but would anyone be surprised if he had?