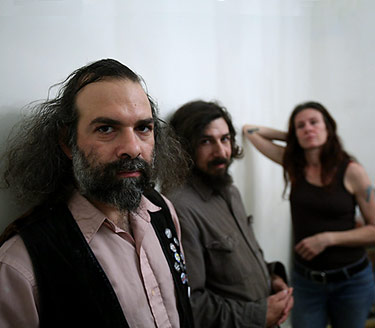 A collective slap to the forehead occurred at MAGNET HQ when we realized our recent 15 In Philly coverage (a 15th-anniversary look at hometown bands) neglected even to mention Stinking Lizaveta. The West Philly trio has been playing instrumental prog/metal since 1996, and hardly a week goes by that the group—brothers Yanni (guitar) and Alexi Papdopoulos (upright bass) and Cheshire Agusta (drums)—doesn’t appear onstage at some local divehole. (In Philly, you don’t go see Stinking Lizaveta; they see you.) Steve Albini put them on the bill for All Tomorrow’s Parties in 2004, and Fugazi’s Joe Lally issued one of SL’s records on his label. So what’s MAGNET’s excuse for the glaring omission? We’re kind of scared of these people. They are technically superior musicians and they look like they have ties to the Russian mob. Besides, we’re sure our neighbors over at Decibel have it covered. Download the title track from the upcoming Sacrifice And Bliss (At A Loss, due March 31) here or stream audio below. Warning: The riffage will dislodge your Thor/Viking helmet beginning around the 2:00 mark.