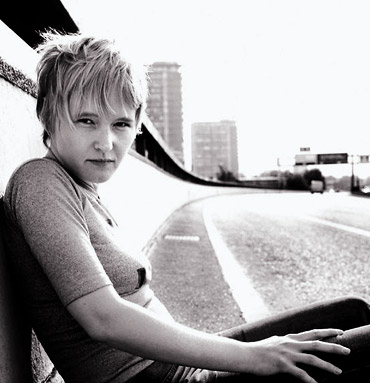 Keene: As I was bumming around SXSW in 2008, I was reintroduced to Sally Crewe, whom I’d met a couple of times over the years, as she was married to a friend of mine. Sally and I and a bunch of others ended up one night at a karaoke place on the outskirts of Austin; there was a party going on, complete with people drunkenly singing along to Iron Maiden songs. Sally invited us to hear her group, the Sudden Moves, play the next afternoon at a party away from the maddening throng of festival-goers. What immediately struck me about her was that she was cute and feminine but looked great holding a guitar, and she could really rock. I’m a bit of a closet rock misogynist—sometimes girls with guitars just look like they’re uncomfortable—but Sally reminded me of great female rockers like Chrissie Hynde and Polly Harvey. After the show, she was saying how they had a European tour coming up in the fall opening for the Wedding Present and their present bass player refused to travel. I blurted out, “I’ll do it,” and Sally said, “OK, you’re on!” So began my career as a bass player, although I’ve been playing bass a lot lately, especially on my last couple of records. We did three shows in Scotland and four in England and had a blast, but we suffered a little bit from Opening Act Syndrome; the Wedding Present’s punters liked to show up quite late.

Sally’s songs are melodic, punchy and sometimes quite short. I’m very envious of that, as it’s really difficult sometimes to get everything in that you want in under two minutes. But she delivers. And, most importantly, they rock. Pick up her new record, Your Nearest Exit May Be Behind You, and tell ’em Tommy sent you.

“Sleepyhead” from Your Nearest Exit May Be Behind You:
https://magnetmagazine.com/audio/Sleepyhead.mp3