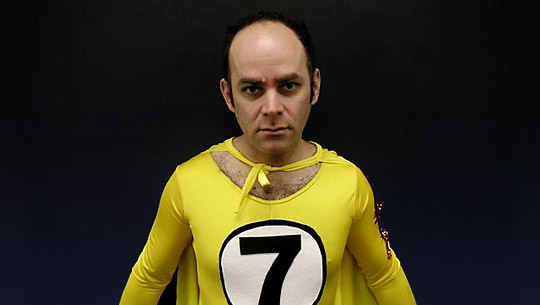 Britta: Todd Barry played Mickey Rourke’s boss at the supermarket in The Wrestler. I loved the movie and thought Todd was great. I met Todd back in 2000 through a friend. Then I met him again through my bandmate in Luna, Sean Eden. He is a man about town. He is a stand-up comedian. He is a very funny, very dry stand-up comedian. Before he was a stand-up comedian, he was a drummer, which is how he met Sean. Now, I find out after all these years that he is also a very talented actor. He also guest-starred as himself, Todd Barry the bongo player, on the Flight Of The Conchords season finale last year. He’s going to get so famous that I won’t be able to talk to him. I will miss you, Todd.