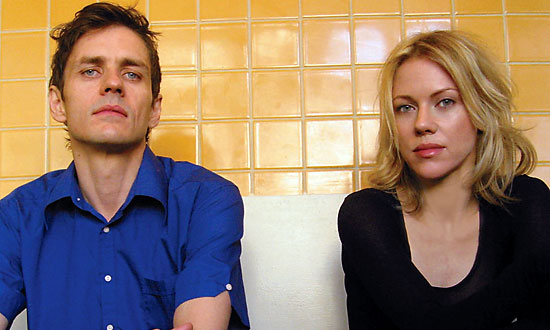 Dean Wareham and Britta Phillips are New York City’s most effortless mod couple, a duo whose sleek, icily romantic pop can serve as both sophisticated art-gallery soundtrack and lovey-dovey fireplace music. In the four years since the breakup of former band Luna, Wareham and Phillips have pursued boutique careers in the best possible sense: in literature (Black Postcards, Wareham’s 2008 memoir of life in Galaxie 500 and Luna), film (already known as an actress, Phillips now voices an animated Adult Swim character, while Wareham scored The Squid And The Whale and acts as well), fashion (the pair have been subjects of photo shoots in various magazines) and the music business (their Double Feature imprint debuted last year).

Fittingly, Dean & Britta‘s latest project sets a series of Andy Warhol’s short films to music. 13 Most Beautiful … Songs For Andy Warhol’s Screen Tests is both a DVD (set for release on Plexifilm in April) and a series of live performances, with Dean & Britta performing their music while Warhol’s silent films are projected behind them. MAGNET spoke to Wareham and Phillips between back-to-back Screen Test performances in Minneapolis on Sunday night. The couple will be guest editing magnetmagazine.com all this week.

“Words You Used To Say” from 2007’s Back Numbers (download here):
https://magnetmagazine.com/audio/WordsYouUsedToSay.mp3

MAGNET: Over the course of the next month, you’re doing a series of the Screen Tests performances; was that your idea, or was it dictated by the commission from the Warhol museum?
Wareham: We have to thank Ben Harrison, a curator at the Andy Warhol Museum, for making this happen. I knew very little about the Screen Tests until he called and described the project. I had been to the museum a few different times, but these are not the best known of Warhol’s films. Warhol made close to 500 of these short silent portrait films between 1964 and 1966 of Factory regulars (Edie Sedgwick, Paul America, Ingrid Superstar), or figures like Salvador Dalí, Bob Dylan, Donovan, Susan Sontag or sometimes just unknown characters someone had met at a party. Even Beck’s mom (Bibbe Hansen) has a Screen Test. Warhol, assisted by Billy Name or Gerard Malanga, would set up the subject and run a reel of film (about three minutes in length). But Warhol’s special trick was to play the films back at a slower speed, so they are stretched to four minutes. This gives the films a spooky quality.

What is each of your favorite of the Screen Test short films?
Wareham: I’m partial to Billy Name’s Screen Test. He was responsible for lighting all these films, and also for painting the Factory silver. He is almost completely still (that was generally Warhol’s instruction in the early films), save for the occasional facial twitch. And I just love the piece of music we concocted for him.
Phillips: Its difficult to choose a favorite, but I’ll say Mary Woronov because she is so present and intense. It feels as if she’s looking you directly in the eye, right now, and sending you all sorts of of signals. Flirting with you, challenging you. I read somewhere that she took it as seriously as being baptized.

I saw in the New York Times that Lou Reed was at the Allen Center performance. What was said between you?
Wareham: I have known Lou for a while; Luna opened for the Velvet Underground when they toured in 1994. There are a number of Screen Tests of V.U. members, shot specifically to be projected on the band as they played their Exploding Plastic Inevitable shows. Anyway, Lou seemed to really enjoy the show; he said he hadn’t seen that particular film since it was shot some 42 years ago. He remembered Andy starting the film rolling and then leaving the room, so he was left alone staring at a camera. The other V.U. Screen Test we used was Nico. Actually, we recorded a song that Bob Dylan had written for her, “I’ll Keep It With Mine,” which appears on her wonderful Chelsea Girls album. Dylan himself sat for a couple of screen tests, and on that day he took one of Warhol’s Elvis paintings, which he later traded to his manager for a sofa. Looking back from our present perspective, you would have to say this was not a smart move.

You started your own label, Double Feature Records. What are your expectations with the label? What do you think you’ll do differently from some of the labels you’ve been on?
Wareham: We set up Double Feature initially just to re-release our L’Avventura CD, which was out of print. We don’t have many expectations, but it seemed once we had set things up with a distributor, it would be easy enough to release a couple of other things. It has been an education to see it from the other side, and realize that there is a lot of work that goes into every release. And that everything costs money. But it’s exciting to find an artist you think is really great (the Sand Pebbles, Cheval Sombre) and to put these records together and send them out into the world and see that other people love their music, too.
Phillips: It’s exciting to be able to put something out there that you believe in. It feels good. It seems such a shame that an artist can make a great album and not be heard. The music business has changed so much and CD sales are down, so I don’t really know what to expect. This is more a labor of love, so I’m not concerned with making money so much as promoting artists we like and putting good music out there. I hope that the monetary decline in the music business will ultimately be good for music culture, that it will weed out those just in it for the money. If we could make a decent living from it, that would be lovely, but I don’t expect to become a millionaire, and that is just fine with me.

Dean, you wrote on the news section of your site about listening to the Kinks’ Face To Face; two issues ago we had Ray Davies on the cover, and a recent item on our site has a little debate going on about overlooked Kinks songs. Would each of you like to submit your own favorite Kinks obscurity to settle it once and for all?
Wareham: My 10th-grade friend Graham turned me on to the Kinks. The first album I bought was Misfits, which came out in 1978. Not one of their better albums, but I played it every day. There was a line in “Rock & Roll Fantasy”: “And when he feels down, he puts some rock and roll on/And it makes him feel all right.” I liked that. Of course the same sentiment is expressed in many a song, but it’s an important thing to remember.
Phillips: I like “A Long Way From Home.” I don’t know if it’s an obscurity, but it’s not in the iTunes store.

Britta, I noticed you wrote about volunteering for the Obama campaign and going door-to-door in a South Philadelphia neighborhood we’re well familiar with. Can you explain to non-Pennsylvanians: a) Mummers and b) scrapple?
Phillips: The Mummers Parade is a celebration of the New Year. Clubs work on the costumes and practice all year for this one day. Mummers tradition dates back to 400 B.C. and the Roman festival of Saturnalias, where Latin laborers marched in mask. My uncle Bob played banjo in a Mummer string band when he was a teenager. My grandparents kept the old satin costume in the attic, and I loved to go up there and touch it. There are about 15,000 mummers in the parade now. Scrapple is delicious. It’s like Pennsylvania Dutch sausage-flavored polenta! It is made by boiling hog offal and cornmeal into a mush, shaping into a loaf, then sliced and fried until crisp on the outside (preferably served on a Kaiser roll with scrambled eggs and cheese … yum).

Dean, I thought Black Postcards was a really successful account of your life in music (so far); unlike some other musicians’ memoirs, you held yourself accountable for personal and professional shortcomings, and it ended up being pretty revealing. What’s been the fallout from that in your life?
Wareham: I was trying to explain what it’s really like to be in a band over a period of years, how it is both fun and boring, exhilarating and depressing, often within the space of 24 hours. And how being in a band takes its toll on your personal life and puts a lot of pressure on your friendships with your bandmates. I think that is unavoidable, no matter what level the band operates on. I revealed more about my own life than I did about anyone else’s, so I don’t feel like I was out there spilling the beans on other peoples’ personal lives. But I did write about conflict inside the bands that I was a part of, because conflict is an essential part of being in a band. To leave that out would be dishonest. There are, of course, a few sentences I wish I had been more careful with, and a few people are mad at me about the book, but I really don’t think it’s possible to write any book—and especially a memoir—without making someone mad.

Are there any postscripts you’d like to add to Black Postcards?
Wareham: I have fixed a few things for the paperback edition (due April 28). Apparently, I had gotten the last song at the final Luna show wrong. That was because my set list that night said the last song was “Indian Summer.” I forgot that we had changed it during a last-minute discussion before the show to “23 Minutes In Brussels.”

Do either of you have any film appearances/acting gigs coming up?
Wareham: I have a small role in the new Jonathan Parker film (as yet untitled). I play a pompous music critic; that role is a step up from the usual thief or junkie or pervert. Actually, I’ve not seen the film—it’s quite possible that I ended up on the cutting room floor.

And finally: Where is Sonic Boom?
Phillips: Sonic Boom just finished a U.K. tour with Spectrum. They will be playing at the Mercury Lounge in NYC on April 26. Our next Double Feature Records release, Cheval Sombre, will be opening. Dean, Sonic and I will play with him.