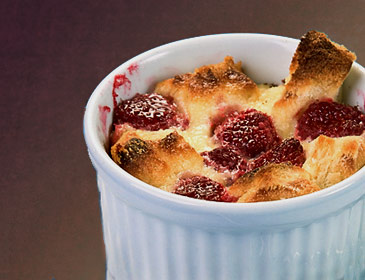 Britta: Bread pudding has become a specialty of mine. Whenever Luna played in New Orleans, we always found time to eat at Mother’s. And we’d always end the meal with their delicious bread pudding. At the airport on our way out of town one time, I found myself in the bookstore fingering through New Orleans cookbooks. I found a recipe for bread pudding with bourbon sauce that looked like it would taste pretty great and copied it quickly onto a piece of paper. (I didn’t have much use for any of the other recipes.) When I got home, I tried it out, adding the zest of a lemon. It was a hit. Recipe after the jump.

Preheat oven to 350 degrees. Soak bread in the scalded milk (I microwave the milk one cup at a time for 2 minutes). Cream butter and sugar. Add eggs. Stir in rest of ingredients. Pour into a casserole dish. Bake 40 to 50 minutes.

Melt butter and sugar over double boiler (I’ve never used a double boiler but I probably should). Remove from heat and whisk in egg; keep whisking until it becomes smooth and creamy like butterscotch. Cool slightly. Add bourbon. Add more bourbon if you like. Top with whipped cream or vanilla ice cream. Serve warm.