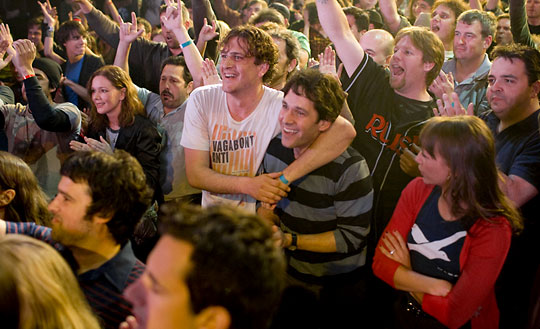 MAGNET’s first missive from Austin doesn’t involve any hot new bands or sold-out showcases. The film portion of the SXSW festival got underway Friday night with the screening of Paul Rudd/Jason Segel comedy I Love You, Man. We sure hope SXSW gives this underground art film and its unknown cast a chance at mainstream exposure. Mitch Myers reports without sarcasm:

The 2009 SXSW Film Conference And Festival kicked off with the premiere of I Love You, Man, starring Paul Rudd and Jason Segel along with Jon Favreau, Rashida Jones, SNL’s Andy Samberg and Jaime Pressley. Rudd carries the lead far better than he did in last year’s Role Models, and there are plenty of laughs generated by this talented ensemble. There were a couple of obligatory gross-outs involving puke and dog doo-doo, but this is a mostly straightforward comedy about a guy about to get married who’s confronted with the fact that he doesn’t have any male friends to invite to his wedding, let alone be his best man. Segel steals plenty of scenes as Rudd’s irreverent, fun-loving new best friend, and the chemistry between the rest of the cast works equally well, especially Favreau and Pressley as a married couple who fight so they can have make-up sex. Most of the actors were on hand for the premiere, and the Q&A afterward was fun despite the fact that all everybody wanted to know was when Segel’s Muppet movie was coming out and whether or not Favreau was working with Vince Vaughn. Verdict: Better than Forgetting Sarah Marshall but not quite up there with The 40-Year-Old Virgin.

Vampire Weekend’s “Oxford Comma” from the I Love You, Man soundtrack:
https://magnetmagazine.com/audio/OxfordComma.mp3