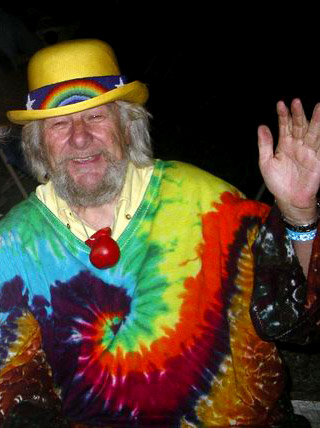 MAGNET’s Mitch Myers reports from the SXSW Film Conference And Festival, where his viewing schedule included Made In China, The Overbrook Brothers, Wake Up and … a Wavy Gravy documentary.

Despite the fratboy vibe that pervades SXSW, it was great to see the original hippie clown prince, Wavy Gravy, hustling his tie-dyed documentary, Saint Misbehavin’: The Wavy Gravy Movie. Of course, it took filmmaker Michele Esrick 10 years to complete the movie, but now you can learn how beatnik storyteller Hugh Romney evolved into the outspoken commune leader, social activist and ice-cream flavor Wavy Gravy. From his early Greenwich Village days sharing a performance bill with Thelonious Monk and John Coltrane to leading humanitarian efforts at the original Woodstock, Wavy has lived long enough to become a counterculture icon. And now you can send your children up to Camp Winnarainbow, where Wavy teaches the performance arts and how to be a clown (in a good way).

Speaking of novelty items, Made In China is a small, sweet film about a naive young man who travels across the globe to find a manufacturer for his innovation in comic personal hygiene. Eager to follow in the footsteps of the inventors of the Pet Rock, sneezing powder, fake vomit, the joy buzzer, Groucho glasses and the Slinky, our inexperienced hero gets taken for a ride but never loses his entrepreneurial spirit.

The Overbrook Brothers is an amusing, Austin-made movie tracing the competitive contempt between two brothers who find out they are both adopted and hit the road to find out about their respective birth parents. Their one-upmanship has no limits, and neither of these guys knows how to walk away.

One of the most unusual films I’ve seen is Wake Up, a powerful documentary about Jonas Elrod, a twentysomething who, after the tragic death of a close friend, begins to see spirits, demons, angels and other cosmic presences. These visions are disturbing to Jonas, disrupting his simple life as well as putting a cramp in his relationship with his girlfriend. Although he’s an unwilling candidate for spiritual enlightenment, Jonas seeks out a variety of doctors, monks, priests and shamans in effort to deal with his unique situation. Ironically, the answers are right in front of him, which is the one thing he has trouble seeing. Repeat: This is a documentary, not fiction. Check it out.

Come check out Arizona with me tomorrow at the BAAMO show. Free food, free beer, and some kick-ass bands. It will be fun. I know it’s out a bit, but I PROMISE that I will get you back to downtown. Besides, South Congress is awesome and it’s right next to Gueros.