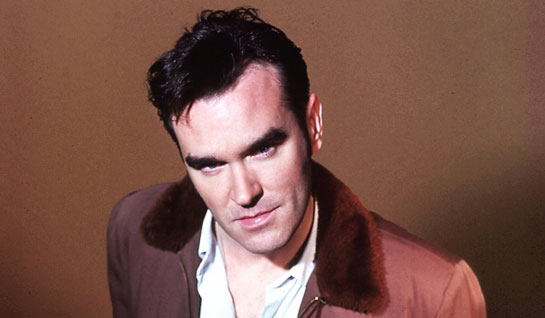 Unlike the Smiths’ fairly straightforward catalog of releases (surveyed in last week’s Over/Under), that band’s former frontman scatters album tracks, singles and b-sides like frisbees tossed into a hedge maze in another country. Here are the five most overrated and five most underrated Morrissey songs.

The Five Most Overrated Morrissey Songs
1. “Everyday Is Like Sunday” (1988)
Where shall the wrecking ball make first contact with Morrissey’s most recognizable tune? Maybe with its licensing to the NFL Network for TV ads promoting football and given a Toby Keith pick-up truck commercial makeover? Too easy. I’ve always been bothered by the grammatically incorrect lyric “How I dearly wish I was not here.” (In this case, the subjunctive “were” should be used in place of “was.”) Otherwise, no complaints. It’s not in the top 10 or 20 Morrissey songs, however.

2. “November Spawned A Monster” (1990)
Are those bongos at the beginning of the song? That’s the easiest question to answer regarding “November Spawned A Monster,” a tune about a deformed/special-needs girl whom everyone pities and no one will ever love. Wait, there’s more: She is called ugly, we can’t even think about her birth month (November, duh), and one day she’ll be walking the street, possibly homeless. Oh, and her parents are to blame for having sex in the first place. That’s a pretty faithful paraphrasing of the lyrics, not an extrapolation on my part. I’m OK with art addressing the cruel realities of life for the physically or mentally handicapped, even in exploitative biographical dramatizations such as The Elephant Man. I’m not OK with this song’s middle section, an extended passage of screeching, moaning and gurgling that sounds like a mental patient being held down and sedated. I don’t even know what that is. Is he mocking the speech-impaired? Shame.

3. “Tomorrow” (1992)
This song arrives with huge, sweeping strings and crashing guitar chords; it’s like Neptune’s arms out there, conducting ocean waves. Then it turns into some dinky, chiming guitar arpeggio that goes nowhere as Morrissey sings about not having sex.

4. “The More You Ignore Me, The Closer I Get” (1994)
The world already possessed Animotion’s “Obsession” and Hall & Oates’ “Private Eyes.” Did it need another stalker anthem? Actually, the lyrics here are clever enough. It’s the main guitar riff that is to blame, a kind of remedial glam-rock figure eight that Mick Ronson wouldn’t wipe his platform boots with. Have I really reached the end of the fourth entry of the “overrated” list without summoning the ghost of Johnny Marr?

5. “Irish Blood, English Heart” (2004)
This song is overrated for several stand-alone reasons and other big-picture ones. This is Morrissey grappling again with his Englishness and distaste for royalty, surefire conversation killers anywhere outside of Morrissey’s work-visa hearings and the United Kingdom, respectively. Also, notice the laser-cannon sounds that begin around 2:04. Is that really happening? Did Star Wars just occur in this song? Will there be Wookies? In a career-spanning context, “Irish Blood, English Heart” was Morrissey’s first new material in seven years, and its release marked his “comeback.” Morrissey came back, but to a different place. Due to a combination of lowered expectations and lower standards, You Are The Quarry was hailed and embraced despite it being aural evidence of Morrissey going through some bizarre, Benjamin Button-like regression. He gets older, but his thoughts get more infantile: I love America but hate its mean people and hamburgers! Gangsters are people, too! I’ll stop here; because nobody has asserted that Morrissey’s recent output is on par with anything he’s done before, there’s no need for the counterargument. I place a good amount of blame at the feet of unvigilant music critics and the listening public. Mediocrity is happening on our watch, and it has been given a wide berth.

The Five Most Underrated Morrissey Songs
1. “I Don’t Mind If You Forget Me” (1988)
Does the catchiest, most upbeat song on a solo debut warrant release as a single? Not in Morrissey’s world. The mopier “Suedehead” and “Everyday Is Like Sunday” got that honor for Viva Hate, presumably to prove Morrissey was the same old sad sack he was in the Smiths. The world at large missed out on “I Don’t Mind If You Forget Me,” a nearly Big ’80s pop song with a bouncy rhythm and squiggles of guitar by Durutti Column’s Vini Reilly. Morrissey might be singing in his highest register ever here as he kisses off the person he got the kiss-off from.

2. “Roy’s Keen” (1997)
What’s not to love about a song whose main character is a punctual, diligent window washer? “We’ve never seen a keener window cleaner,” sings Morrissey, whose man crush on Roy provides the impetus for one of his most underwrought, unburdened songs. The backing band—presumably Alain Whyte and Boz Boorer—even get to chime in with a chorus of “la la la”s. Apparently, the title is a pun on Roy Keane, midfielder for Manchester United, but like everything soccer-related, it could be a ruse. This track appears like a day lily on the otherwise barren field of material known as Maladjusted. No wonder Morrissey disappeared for seven years after the album. I don’t know what else to say about Roy, except this: He’s a good man, and thorough.

3. “Girl Least Likely To” (1989) and 4. “Why Don’t You Find Out For Yourself” (1994)
Not sure when it started (probably circa the Smiths’ “Paint A Vulgar Picture”), but at some point Morrissey started writing about being a pop star and the perils of music-biz success/failure. This is usually the same point at which listeners tune out because: a) it’s completely outside the realm of ordinary human experience, and b) if you feel the need to complain about your career in song, your career is probably on its last legs. For Morrissey, however, the subject of himself is endlessly fascinating in all regards. To be fair, “Girl Least Likely To” is an advice song to an aspiring writer/musician/artist (though it’s also thinly veiled self-criticism; see the line “one more song about the queen”), and its put-downs of no-talent friends are meanly satisfying. “Why Don’t You Find Out For Yourself” is from Vauxhall And I, an album luxuriantly produced by Steve Lillywhite. It’s got a clunky lyric about businessmen who want to “siphon all your dough” but is otherwise smooth sailing: a very underplayed vocal by a relaxed-sounding Morrissey pairs well with the brisk acoustic-guitar strum.

“Why Don’t You Find Out For Yourself”:

5. “Boxers” (1995)
There’s nothing particularly remarkable about “Boxers”; it’s not going to blow your windsock either way. It’s a nice, jangly tune about fighting and losing. It’s almost half-there, a pleasant surprise if it comes on the Sirius “alt-rock” channel while you’re shopping. Sometimes that’s all you want from your favorite pop star.

Honorable Mention
“Jack The Ripper” (the version on the “Certain People I Know” single, not the live one found on My Early Burglary Years), “Get Off The Stage” and, as an album, Southpaw Grammar (a loud-rock record often viewed as Morrissey’s Monster, though it’s much less deliberate).

12 replies on “The Over/Under: Morrissey”

I mentioned this to you guys before, but the NFL Network version of “Sunday” is a cover.

I also think Maladjusted is an under-rated album…

Matt H – Yes, we know it’s a cover. Hence the “makeover” comment. The point is that Morrissey licensed that song to the NFL Network and allowed the cover to happen.

Morrissey has never been able to achieve the greatness of 1988’s Viva Hate. Every album since has not even come close. He should have stuck with Stephen Street. He would have had a very different career.

Given the byline, I didn’t read anything past that.

no “bengali in platforms”… hhmmm something seems amiss…

Matthew, Morrissey did not license EILS to the NFL. Artists have no control who covers their material, it’s called a compulsory license. You think Morrissey/Marr were super psyched to have t.A.T.u cover “How Soon Is Now?”? I disagree with you on “Tomorrow”. “Get Off The Stage”? Really? It’s right down there with “Tony The Pony”. “Girl Least Likely To” seems somewhat less brilliant when you find out it’s a straight-up rip off of The Cookies song “Only to Other People”.

I disagree with almost everything you say – where to start…. I just wonder why your opinion is worth being published at all – it isn’t interesting – well formed or based on any kind of sound judgement – perhaps you would be more suited to working in catering or in a local shop? I suggest you resign now before the inevitable push comes.

You suck man. You don´t have it. So Wrong. The most overrated songs you chose are some of the best he has written. The word is bond. James Bond.

I completely agree with the most underrated song. I can listen to “I Don’t Mind…” all day.

I think it’s pretty funny to talk about over rated music when the artist hardly gets any airplay or general promotion. I think it’s quite an achievement so many people still know Morrissey and that he’s able to sell out a venue with absolutely 0 promotion. Oh and why obsess over something small like were or was…there are a lot of songs that are grammaticallyincorrect. Doesn’t make them bad songs.