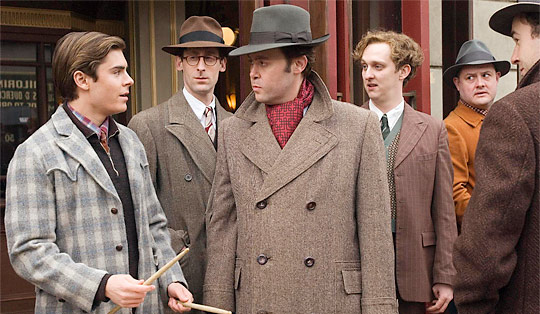 Me And Orson Welles isn’t being released until the fall, but when the Texas film community gets together for SXSW, anything can happen. Hence, the secret surprise screening of Richard Linklater’s new film was no secret and certainly no surprise. He based his Welles flick on Bob Kaplow’s novel of the same name, and the “period drama” takes place during one week in New York City, circa 1937, well before the great Welles made his immortal mark in film and radio. The plot revolves around a brash teenager (Zac Efron) who’s given a role in Welles’ Broadway production of Julius Caesar and gets into a bizarre love triangle with the director (Christian McKay) and his lovely production assistant (Claire Danes). This mainstream homage feels just a little like My Favorite Year, and although the show-within-the-movie shtick has been done before, it’s clear that Linklater has matured well beyond slackers and stoners, and there’s no turning back for him as a filmmaker. Maybe next time Linklater will make his own epic a la Citizen Kane, but this is not it.