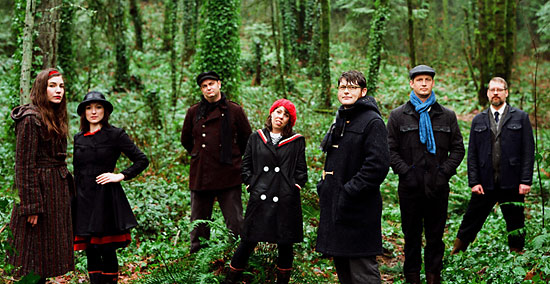 As SXSW turns from film to music, MAGNET’s Mitch “Danger” Myers heads straight to the edge of the festival’s seedy rock ‘n’ roll underworld … at a posh, IFC-sponsored nightclub event.

As the Film Festival dies down and the SXSW Music And Media Conference begins to rear its massive head, I’m already wistful about sitting peacefully in movie theaters and maneuvering easily through the city of Austin. No more. The town is crammed to capacity and Tuesday night’s simultaneous celebration of film, music and St. Patrick’s Day was just too much of a good thing. Thank goodness for the fine folks at the IFC Channel—not only did they invite MAGNET to see the Decemberists (pictured) and Gomez perform at their Crossroads party at the classy Pangaea nightclub, but I was actually able to sit down! Last year, IFC presented My Morning Jacket and Yo La Tengo, and the cable channel is quickly establishing a tradition of offering killer indie rock to the industry faithful. A loose and rocking Gomez opened the show, mostly playing stuff from latest album A New Tide. The Decemberists didn’t get done amazing their fans with a cross section of new and old material until almost 2 a.m. Colin Meloy and Co. performed tunes by the Pogues, the Velvet Underground and Fleetwood Mac. Only 500 people were able to attend the private show, but both bands will be playing formal SXSW gigs as the week progresses. By the time you read this, the Decemberists will have already performed their forthcoming album The Hazards Of Love in its entirety to a sold-out crowd at Stubbs, courtesy of NPR Music. IFC and NPR? Who’d have thought that those institutions would be appropriating rock ‘n’ roll? SXSW: where art meets commerce and barbecue, and nobody seems to mind.

Colin Meloy Does The Decemberists’ “We Both Go Down Together” Live (download):
https://magnetmagazine.com/audio/WeBothGoDownTogether.mp3

You don’t need 7 people in an indie band. The public needs to know who is the real talent in this band. There can only be 3 at best. Cocteau Twins 101.

sounds good bob. maybe you and the cocteau twins should get a room.