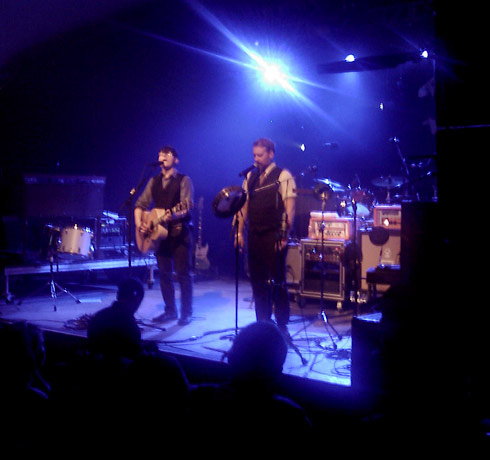 MAGNET’s Corey duBrowa may have spent his daytime hours doing “day gig” things in Austin, but then he donned his finest “none more black” rock attire to get out last evening and partake of the cornucopia of musical happenings going on around town during SXSW.

As it happens, the Decemberists’ Colin Meloy really was meant for the stage.

After hitting a few early shows on Wednesday—the best of which, New York City’s Phenomenal Handclap Band, came on like KC And The Sunshine Band on a serious cough syrup jag; the worst of which, New Zealand’s Ladyhawke (perhaps we should call her “Eightieshock”?), replicated Reagan-era forgettables like Missing Persons and Berlin but without any of the charming or redeeming parts—we headed to Stubbs’ giant outdoor confines, where NPR’s showcase event featured Dayton’s Heartless Bastards, North Carolina punkgrass eccentrics the Avett Brothers and Portland, Ore.’s Decemberists (pictured), who performed their latest LP, 17-song concept album The Hazards Of Love, to a sold-out crowd who basically ate out of the palms of their hands for the next hour and a half.

You’ll be hard pressed to find a better live act during SXSW (or hell, at any time, under any circumstances) than Heartless Bastards; frontwoman Erika Wennerstrom’s stage presence is pitched somewhere between Beth Orton and Chrissie Hynde, and while her voice is capable of scaling the throaty, evocative vistas Orton routinely explores with her folktronica work, Wennerstrom is, at heart, a country artist in rock-chick attire, singing somebody-done-somebody-wrong songs in the key of sad while wringing every last bit of gritty, grimy noise out of her Les Paul as her backing trio chugs aggressively along beside her. Heartless Bastards’ latest album, The Mountain, formed the emotional core of the evening’s set and has been somewhat overlooked by the masses even as it has racked up the kind of critical accolades that make it a shoo-in for the annual “year’s best” polls come December. I dearly love this band and if there were any just/right god, he’d be playing Heartless Bastards records on his or her cosmic radio station right this very minute, 24/7/365.

The Avett Brothers, meanwhile, are something of a more acquired taste in the same way the Pogues once were: Deep down, despite the banjos, acoustic guitars and stand-up basses, they’re a punk band, playing a supercharged form of hillbilly music that toggles effortlessly between such disparate anti-establishment signposts as Hank Sr. and the Clash. The group’s two frontmen, brothers Seth and Scott Avett, are a compelling duo, singing close harmonies and speed-strumming their respective instruments even as the songs they play (“Murder In The City,” “The Ballad Of Love And Hate”) touch upon family tensions, economic hardships and trying times like amphetamine-fueled takes on the classic country songs they no doubt grew up listening to. Their set was far too short due to the time constraints imposed by the showcase’s organizers, but leaving fans wanting more is a SXSW staple (or as one wag put it this evening, “if you didn’t leave the crowd calling you back for an encore, you must’ve sucked pretty bad, man”).

Which brings us to Meloy’s Decemberists. The band reportedly spent several non-stop weeks hunkered down in Portland rehearsing the new album, front to back (in a recent interview, Meloy told me that Hazards was “basically a studio creation,” meaning that the songs weren’t necessarily recorded in the sequence in which they appear on record, and therefore, hadn’t been played that way before, either); this evening’s one-hour-plus set represented the first time the group had attempted to play the record in its entirety in front of a live audience. To say that the show was a triumph is to understate matters significantly; expanding its ranks to include Lavender Diamond’s Becky Stark and My Brightest Diamond’s Shara Worden (who both play key parts in the record’s running narrative, as the “good” and “evil” female leads, respectively), the group demonstrated an amazing command of the album’s complex material, transitioning between quiet folk songs, intricately orchestrated group jams and the louder riff-a-rama segments with fluid ease. As ever, the band’s sheer musicality proved a jaw-dropping affair—watching keyboard virtuoso Jenny Conlee, guitar-whiz Chris Funk, bassist Nate Query and percussionist par excellence John Moen go about their task is a joy to behold—but what’s more amazing to consider is the fact that Meloy wrote an album that runs about an hour in length, weaves together a musical patchwork quilt from completely disparate musical genres (’60s English folk revival, ’70s proto-metal, Broadway musical theater) and does so in a way that entertains, engages and inspires.

In this era of American Idol disposability, stolen digital downloads and singles that don’t stick in the brain long enough to even make it to the next stop light in your car, it’s amazing to think that an hour-long concept album might just be the thing that saves rock from caving in on itself. If nothing else, Hazards will undoubtedly prove to be one of the live events of the summer. This was a special show, and the Decemberists are that rare thing in today’s troubled times: a special band, worthy of your time, attention and valuable entertainment dollar.