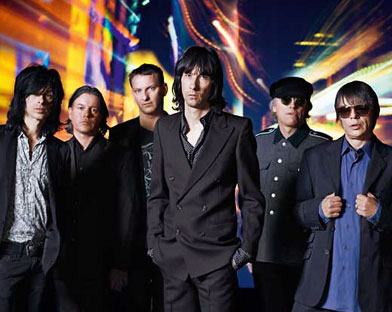 MAGNET’s Corey duBrowa checks in from the annual bacchanal that is Austin’s SXSW festival and finds that it’s momentarily turned into Portland South:

To judge from last evening’s Rose City-centric bill, Portland’s music-playing massive (in its entirety) must’ve decided to head to Austin for Spring Break this year. Oh sure, the day itself was diverse enough: Paste’s party at Radio Room included sets from San Francisco’s Thao With The Get Down Stay Down (which probed at the previously-invisible line separating Rickie Lee Jones from Cat Power) and Cambridge, Mass.’s Passion Pit (a New Order-leaning act whose set was unfortunately plagued by sound problems, hot/feedback-prone microphones and a somewhat lackluster performance; blame it on the heat, perhaps? The band certainly kept referencing it). Nothing out of order here, so far.

But after a quick dinner meant to serve more as a venue to “parfait” food and alcohol (my friend is the one responsible for altering the English language by turning a word previously known as a dessert-oriented noun into a verb, meaning, “to stack unlike items on top of one another” as a survival technique for SXSW), our crew headed over to Red Eyed Fly and began to notice that everyone in the place was of a decidedly Northwestie provenance: hey look, the Thermals (who rocked a completely packed venue a few hours later)! There’s the Decemberists’ Chris Funk (who added steel guitar and keyboards to Blue Giant across the street; more on that in a moment)! Aren’t those the guys from Shaky Hands and Horse Feathers? Portland’s in the hizzouse, yo. And they came to party, albeit in my hometown’s understated, sort-of-ironic way.

So the evening began in earnest with quiet, contemplative sets from Shelley Short and Laura Gibson, the latter of whose drummer pulled out every known musical instrument from his Carrot Top-like trunk of tricks—melodica, bowed saw, some sort of mounted/clicking castanets device and a banjo—to the seeming delight of a guy who very much resembled Babyshambles’ Pete Doherty, right down to the weather-inappropriate knee-length overcoat and porkpie hat. (Note to the paparazzi: If it was Pete, he was very well behaved indeed, so the rumors of a potential Libertines reunion seem somewhat well founded if that event is dependent upon Doherty staying out of rehab and/or prison.)

Having chatted up Funk for a while at the bar, we headed across the street to Club de Ville, just in time to catch Blue Giant (essentially, the relentlessly polite/talented Viva Voce kids with Funk, Seth Lorinczi and Evan Railton backing). This band is an example of what makes Portland so great: every one of these musicians plays in some other group, but their “side project” is better than 90 percent of the primary acts we’ll see this week, blowing back the hair of the scant crowd present with a rock-solid combination of Byrds-like psychedelia and Zep-tastic chops (for those who haven’t seen her, Anita Robinson is the new Jimmy Page—pass it on) and a final song that slid fluidly between the sonic terrain of Page’s “In My Time Of Dying” and Duane’s Allman’s flights of glass-fingered fancy. My discovery of the week.

The evening’s final stop pushed me away from Stumptown South and toward the regularly scheduled mishmash more typical of SXSW. Cedar Street Courtyard is a venue that perfectly represents what live music in Austin stands for: an outdoor live envelope hemmed in between two packed bars, routinely stuffed fire-marshal-code-violatingly full of humans for nights just like this one. The bands on the bill stood at opposite ends of the punk spectrum: Atlanta’s Black Lips put forth a prototypically snot-nosed set that was as fun as it was brief, a mashup of the B-52s manic danceability and the Ramones’ hooky, loud/fast/rules catchiness, throwing an already-tight crowd into spasms of random squirming. And then there was Scotland’s Primal Scream (pictured), which many of you who came of age in the ’90s may remember (or not) as the unwitting soundtrack to your first MDMA experience. Primal Scream tilts its classic(-ish) rave ‘n’ roll—think of the netherworld where the Faces and Stone Roses shake hands with the Prodigy, where rock mugs dance music in the alleyway and makes off with its girlfriend and wallet—toward a decidedly punk form of nihilism. Frontman Bobbie Gillespie gives the appearance of a man who hasn’t willingly smiled since the ‘80s and whose band sounds ferocious but can give the appearance of being no more excited than Joey Ramone at an art exhibition—it was amazing not to see Gillespie actually yawn from under his dark curtain of hair, even as the Primals played a set so mean-spirited and loud it could’ve sterilized frogs at fifty paces. The Primals are rock ‘n roll as it used to be: dangerous, dark, played to a crowd mere moments away from trampling itself to death and/or overdosing on whatever it was they were all partaking of at the time. My kinda trouble.

In retrospect, I must’ve had too much to Tweet last night. Signing off until later on this evening …