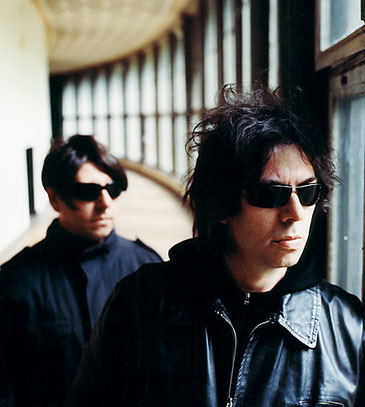 MAGNET’s Corey duBrowa wraps up a week’s worth of reports from Austin’s SXSW with one last missive from the front:

Riding the elevator down to the lobby of my hotel at the unholy hour of 5:30 a.m. (just in time to catch my early flight back to Portland, Ore.), I passed a series of bleary-eyed stumblers clearly making their way back “home” from wherever they’d been the night before. As Echo & the Bunnymen (pictured) once sang—and did, live, earlier in the evening—“Won’t you come on down to my rescue?” seems an appropriate theme for the conference’s messy, final day, and it’s precisely this juxtaposition of seemingly opposed realities that makes SXSW what it is: part indie, part major; 50 percent conference, 50 percent Roman toga party; half-cocked, half-amazing.

Exhibit 1A: the concluding day of the festival’s musical lineup. On the one hand, the Twittersphere was abuzz with the long-rumored appearance of Kanye West at a private party hosted by Fader. I can hardly think of an artist less appropriate for SXSW than West, whose highly calculated, careerist hip hop stands in stark contrast to the sort of unsigned indie-band routinely seen maniacally running around between seven back-to-back daytime gigs. And yet on the other, artists like West (as well as Metallica, which put in an appearance at Stubbs Friday night, and a reunited Jane’s Addiction, which played a private function Thursday) do, in fact, sit side-by-side with the festival’s more typical fare each year.

So even as we marveled at some of the last day’s musical offerings—such as the afternoon run-of-show at the Mohawk’s sunny outdoor patio, which featured Portland’s terrific Viva Voce, Scotland’s snoozy Camera Obscura and Japan’s Peelander-Z (the most hilarious, energized, out-and-out insane display of comedi-punk/metal you’ll ever witness; seriously, go find this band on its current North American tour so you can fall in love with enthusiastically reckless live performance all over again—we also found ironic some of the strange bedfellows the festival’s sprawl created (such as seeing Spoon’s Britt Daniel walking down Fifth Street all alone; he was in town to participate as part of the daytime panel “Producers Making Classic Records”), then seeing the woman whose album he’d just produced, San Diego’s Anya Marina, later that evening at Maggie Mae’s (unfortunately, her wisp of a voice and compellingly written material was somewhat wrecked by a vortex of bad sound/technical issues). At the Chop Shop Records showcase that evening, you could witness Denmark’s Asteroids Galaxy Tour (authors of “that iPod commercial song” called “Around The Bend”) and Kansas City’s terrific Republic Tigers (who’ve had songs placed on Grey’s Anatomy and Gossip Girl but whose Travis-inspired material and Ian Curtis-indebted stage moves have yet to find a mass audience) in close proximity.

The evening ended at a relatively new venue—Rusty Spurs, which featured a chaotic door situation, hopelessly late gig schedule, boneheaded bouncers and a sticky-hot club packed to the rafters with pissed-off punters—and featured Liverpool’s Echo & The Bunnymen, whose music is still as ahead-of-its-time as it ever was but whose sad, wilted-at-the-edges performance gave the impression that the band has become something of a nostalgia act, with iconic frontman Ian McCulloch devolving into the very cliché of a faded former rock-star, sunglasses, unintelligible Liverpudlian side commentary, ever-present cigarette and all.

As McCulloch himself sang, is this the blues I’m singin’? Hardly—the music industry may be in a state of crisis at the moment, but you’d be hard pressed to tell from the throngs crowding Sixth Street late into the night, every night, throughout SXSW 2009.