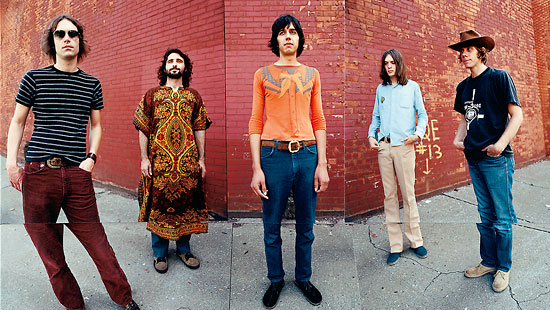 :: BEACHWOOD SPARKS
Once We Were Trees // Sub Pop, 2001
Beachwood Sparks couldn’t walk a block without hearing some kind of Gram Parsons comparison, and rightfully so. The Los Angeles band’s mellow-gold appropriation of California country/rock sometimes felt like the equivalent of trying on a Western shirt and fringe vest at a Melrose Avenue vintage shop. But sophomore effort Once We Were Trees (recorded at the home of J Mascis, who played guitar on two songs) pushed the signature sound into psychedelic places where Parsons had never been. Many of the album’s tracks began nice and steady with honky-tonk fingerpicking and woozy pedal steel but ended in a miasma of organ drone and haunting harmony vocals. A little too weird for those expecting more cookie-cutter cowboy songs, Trees was met with as much puzzlement as praise.

Catching Up: Beachwood Sparks was last heard from via 2002’s Make The Cowboy Robots Cry EP, and its members have since moved on to other projects. Bassist Brent Rademaker formed Frausdots and joined brother Darren in the Tyde. Guitarist Chris Gunst plays in Mystic Chords Of Memory. Guitarist Dave Scher and drummer Jimi Hey formed the short-lived All Night Radio. Drummer Aaron Sperske fronts As Is. Beachwood Sparks reunited in 2008 to play Sub Pop’s 20th anniversary party.

“The Sun Surrounds Me”:

2 replies on “Lost Classics: Beachwood Sparks “Once We Were Trees””

I picked up this album after reading the Magnet article pictured above and loved it. Thanks for the reminder that it’s overdue for a listen.

I thought everyone was like me and still listened to this album about once a month. Glad to see you bringing it back.