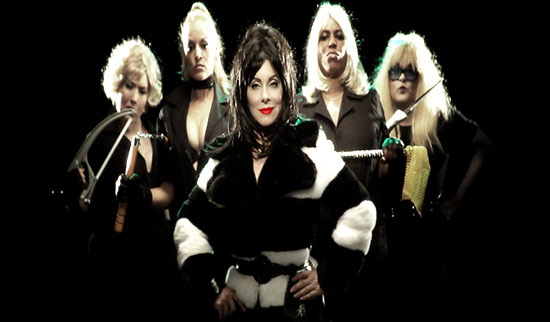 She Devils On Wheels (1968)
If you’ve ever wondered about the origins of chlamydia, look no further. She Devils On Wheels is where the beaver hits the road, with an all-girl biker gang called the Maneaters who pummel and bang their skanky asses across an entire neighborhood. With not much in the way of a plot line, this movie was director Herschel Gordon Lewis’ self-confessed attempt to even the score for all us babes in boyland. Instead, it ends up making you want to take a shower.

The Maneaters live by one code, and one code alone: Men are the scum beneath their skidmarks. And if you make the the fatal mistake of turning sweet on one, you have to kill him. Period. OK, there are two codes. They live by two codes … except for the other ones. Whatever. This is a multi-tiered organization. If you wanna ride with the Maneaters, you’ve got to have sex immediately after a race. But if you’re gonna need a real “juicy stud,” you have to win, and then you can pick from the “stud line,” a hairy male smorgasbord forever marinating in the girls’ X-rated clubhouse. When the Maneaters aren’t dragging some poor slob behind their bikes, they’re hosting extremely unattractive orgies (thankfully clothed), rolling around on dirty mattresses in their bras and estrogen-soaked capri pants to a soundtrack straight out of The Dating Game. (This is moviemaking!)

“We’re not a bunch of daisy-pullin’ broads,” cackles Queen, decked out in white go-go boots, oozing in understatement plus other unmentionable fluids, right before she decapitates a guy then beats his headless corpse with a tire chain. Make no mistake: She Devils On Wheels is a tender coming-of-age movie in which girls struggle to find themselves in a baffling world through a series of kooky misadventures. While I wouldn’t want to ruin the ending for you, there really is no ending—along with no middle and no beginning.

“She Devils On Wheels” from Josie Cotton’s Invasion Of The B-Girls (download):
https://magnetmagazine.com/audio/SheDevils.mp3