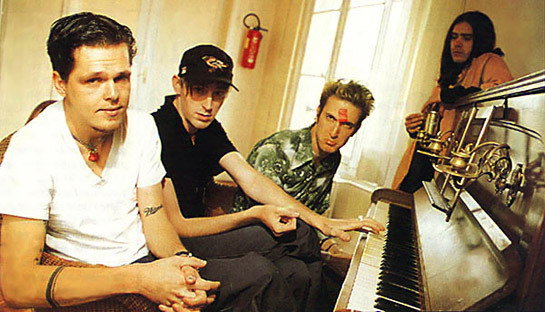 Like so many indie labels in the ’80s and ’90s, Minneapolis-based Amphetamine Reptile was started by a guy for the sole purpose of putting out his own band’s records. In this case, the guy was a Marine named Tom Hazelmyer, and the band was Halo Of Flies, an angry, in-your-face punk trio with a large chip on its shoulder. After three Halo singles (released in 1986 and 1987), Hazelmyer started issuing seven-inches—and, eventually, full-lengths—by similar-minded outfits such as the Thrown Ups, the God Bullies and the U-Men. By the early ’90s, AmRep was the premier label for all things aggressive, with a roster including hard-rocking stalwarts Helmet, Tar, Surgery, Boss Hog and Helios Creed. What Sub Pop had become for grunge, AmRep was for noise. (The word was even incorporated into the label’s logo.)

Like Sub Pop, AmRep excelled at generating as much—if not more—interest in the label itself as it did in the bands signed to it. There was the popular Dope-Guns-N-Fucking In The Streets seven-inch series, which featured new songs from AmRep groups alongside exclusive tracks from the likes of Mudhoney, Superchunk, the Jesus Lizard, Jawbox and the Boredoms. There were AmRep package tours (given names such as Ugly American Overkill and Clusterfuck), in which the label sent up to five of its bands out together, always with plenty of tour-only merchandise to sell. AmRep even had its own recording studio, manned by in-house engineer (and Halo Of Flies bassist) Tim “Mac” McLaughlin, where bands could record inexpensively.

The group that most personified Amphetamine Reptile was the Cows, a Minneapolis quartet that could make you laugh, cry, puke and crap your pants—all during one of its gloriously bizarre sets. (Suffice it to say, if you didn’t enjoy being kicked or having food—or worse—thrown at you by the band, you didn’t want to be in the front row at a Cows gig.) Led by Shannon Selberg—who, when not shrieking like a mental patient, added bugle and trombone to his group’s manic mix—the Cows released all but the first of their nine albums on AmRep. 1992’s Cunning Stunts was the band’s best LP, as it added some much-needed structure to the Cows’ unrelenting anti-pop noise.

AmRep eventually began releasing records by groups that didn’t fit into the noise genre, including Chokebore, Gaunt and Nashville Pussy. During each month in 1996, the label issued a new single by the Melvins (who had released the deliberately obtuse Prick on AmRep in 1994 under the moniker Snivlem) in editions of 800, then compiled all 12 on CD the next year. In 1999, AmRep put out its last record while functioning as a working label: a single by the Heroine Sheiks, Selberg’s post-Cows band. Since, Hazelmyer has done a handful of limited-edition seven-inches by Billy Childish, pre-Hold Steady outfit Lifter Puller and others. The most notable of them is a one-sided single of the Melvins covering Halo Of Flies’ “Spit It Out.” What makes it notable? The fact that the Melvins don’t actually appear on it; it’s simply Halo Of Flies playing one of its original songs. Which goes back to the reason why Hazelmyer started AmRep in the first place: to put out his own band’s records.

:: CHOKEBORE
Anything Near Waterz // Amphetamine Reptile, 1995
Chokebore (pictured) was the first AmRep band to sound absolutely nothing like an AmRep band, but nonetheless, this Los Angeles-via-Honolulu quartet was one of the label’s best. (After hearing Chokebore’s 1993 Motionless debut, Kurt Cobain asked the band to open for Nirvana on the In Utero tour.) Led by Troy Miller—whose melodic warble was equal parts yodel and yelp—Chokebore was far more minimalist than its labelmates, specializing in an exhilarating brand of post-punk. Sophomore effort Anything Near Water remains the band’s high point, a 15-track journey through a sexually charged bizarro world populated by dying birds, bleeding camels and scared little mice.

top article. hammerhead deserve a mention here, 3 top lps + 7″ and comp stuff better than most things since. god bullies, vertigo! – fuck, its all great. maybe getting nostalgic for 15 years ago but it still stands up today i reckon.

Yes. AmRep were one of the most distinctive labels of the 1990’s. They put out the debut albums of both Helmet and Surgery and had one hell of a roster (Hammerhead, Vertigo, Cows, etc.) They probably were just as influential as Sub Pop, but not in the mainstream.

Dope, Guns and Fucking Up Your Video Deck on VHS FTW!

I’d have to say Sexy Pee Story by the Cows is a bit better Cunning Stunts.
Number 2, like drone rivers said, Hammerhead not only deserves a mention here, but a big ass headline. One of the best, PERIOD.
If your gonna get anything off AmRep & to the the heart of it, get these:

Big Metal Birds & Into The Vortex are two of the greatest albums your eardrums will ever have the pleasure of hearing.

That 1996 showcase at sxsw (Friday night at Emo’s) was friggin’ awesome. Standing room only in spite of the rain… The Big Train from Denton TX opened the show. Good times, wish there could have been more of ’em!