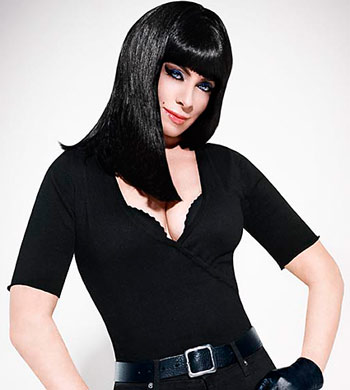 Beyond The Valley Of The Dolls (1970)
But it will always be the music of Beyond The Valley Of The Dolls that is the be-all and end-all in this epic comic-book musical of punishment and redemption. The soundtrack is at times falling-down drunk with soaring strings and opulent orchestration, sometimes in the guise of spy music, game-show music, Lassie music, even soap-opera organs thrown into the mix, intentionally and perfectly over the top. And Russ Meyer oversaw all of it, with the same fervent and loving attention to detail he carried over into every aspect of the making of this movie. He even insisted the all-girl rock band, renamed the Carrie Nations, who were not musicians (or actors), learn how to play their instruments or at least fake it better than anyone had ever done, (they still hold that cache) rehearsing hours a day so they would look like and, more importantly, feel like real musicians.

What ultimately sets this movie music apart, though, is its untouchable take on the music of the day: a time capsule of psychedelic rock, pop, funk and heavy on the British Invasion, through a kaleidoscope brightly. It not only defined an era without missing a beat, it has become timeless.

Someone very wise once said there is nothing more powerful than an idea whose time has come; this was just such a time, and the ideas were huge. Before disco strutted its bad self under the spinning disco ball reflecting on a sea of white encrusted nostrils, before punk rock ripped out the throat of society (and deservedly so) as it nodded into unconciousness from slamming smack, there was this time: this brief time when music was the religion of choice, when people really believed it would change the world. It was all about Love and tearin’ the mother down. Now I’m as guilty as anyone of making fun of the hippies (for the love of God don’t tell anyone I’m a hippie!), but it reminds me of that Star Trek episode when the Enterprise reaches a distant planet ruled by the great Apollo, the last surviving Greek god in the known universe. With no one left to remember him or bring him offerings, he dies of a broken heart, and at the end, with uncharacteristic humility, Captain Kirk muses, “Would it have hurt us, I wonder, just to have gathered a few laurel leaves?”

Sure, after the ’60s were all over, there were those who scurried back to the suburbs to hide in front of their televisions, those who retreated to their teepees, communes and cults, those who pimped their souls out on Wall Street and in ad agencies and still feast on the entrails of their own betrayed ideals. However you want to spin it—and maybe despite itself—the last gasp of the ’60s lives on in Beyond The Valley Of The Dolls through its music. This is the legacy they leave us. It is there in Lynn Carrie’s voice, in the songs of mega songwriter Stu Philips and in the musicians who played behind them. But there is an underlying poignancy as well. It might have been drugs that opened the doors of perception, but it was Charles Manson who shot Bambi in the head, mid-filming, and Meyers/Ebert didn’t skip an opportunist bong hit to rewrite the ending into basically a musical snuff film. But that the ’60s live on in this movie, with this director (who had not an iota of a clue about the times they were living through), could it be any more perfect?  Could it? You’ll just have to take my word for it: It is perfection. Oh irony, I am your whore.

Rest assured Beyond The Valley Of The Dolls is irreverent and self mocking, dripping with nymphomaniac hippies, betrayal, fashion and dismemberment. Behold montage after montage foreshadowing a virtual cafeteria of other bleeding, syrupy musical montages to come, more types of creepy staring than I knew existed, and an abortion that turns into pancakes which I had thought impossible. It was my own exquisite agony having to choose which song to include on Invasion Of The B-Girls, but “Days Of Now And Then” prevailed; it’s one of the most heartbreakingly beautiful and absurd songs ever written, climaxing during a gauzy love scene between two man-hating lingerie lesbians about to be slaughtered by a drug-crazed transvestite.

I will always consider it a great honor when Russ Meyer told me personally that I would be sued “till the end of time” if I ever recorded any of the songs from his movies. I didn’t listen, of course. But my deluxe bouffant wig is off to you, sir. I just hope that wherever you are now, they have giant knockers to your exact specifications.